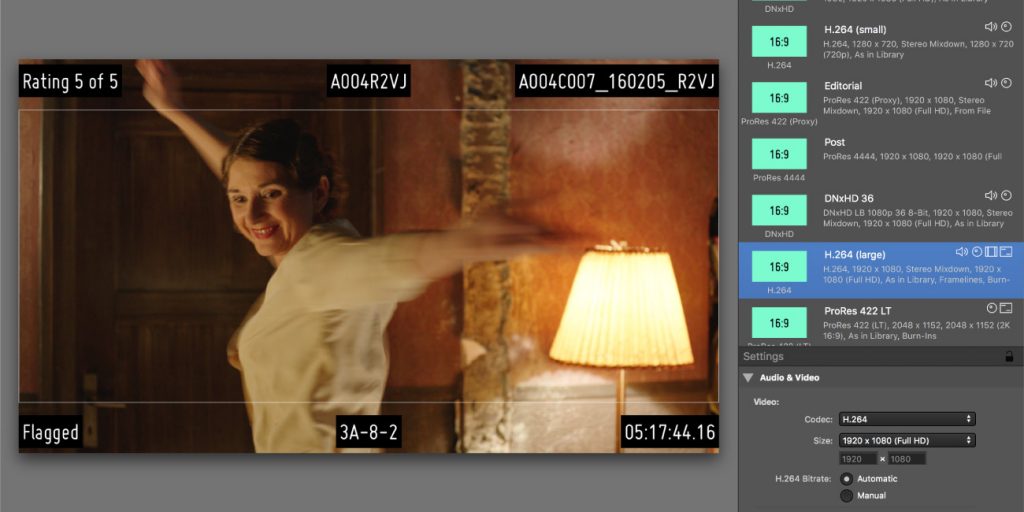 When you are in the position of handling camera source material on set, you might at some point be asked to go one step further, and also create dailies on set or near set. This extends your responsibilities and raises additional questions that need to be addressed.

To help you get started with proxy creation on set we compiled a little guide that outlines a selection of 3 of the extended duties that come along with the new responsibilities. While they are only good examples of what is waiting for you, they should help you get in the right mindset to prepare your first job that involves transcoding.

In addition to the secure backup of camera cards to multiple destinations you now have to make sure that you create a setup that also allows to run transcoding jobs. While taking care of transcoding, other camera cards come in and need to be copied so the copy and transcoding process has to go hand in hand to complete your day in time. This basically means more tasks have to be completed in probably the same time.

The most likely process is to first backup the original clips to one or multiple destinations. One of those initial destinations will then become your source for the transcoding jobs. The storage unit that is used as the source for transcoding should provide fast read speeds as this will be a crucial component for fast transcoding. We will discuss this in depth in the next section.

How Do I Organize Transcoding and the Backup of the Proxies?

I recently came across a setup that in my opinion quite well illustrates the needs when you manage data and create dailies on set:

The setup involves two RAIDs. “RAID A” is a SSD RAID set to RAID 0 (faster  I/O, no redundancy) and “RAID B” is equipped with HDDs and set to RAID 5 (slower I/O, redundant). The first backup goes simultaneously to RAID A and B. From RAID B further backups are then run to travel drives. RAID A is available as the source for transcoding.  This setup might be reducible in complexity but very well illustrates the needs of having to handle backups and transcoding.

In my opinion it generally makes sense to transcode to one destination and then backup the transcoded clips securely to all the additional locations (e.g. travel drives, etc.) where they need to go. This way, instead of transcoding to multiple resources at a time you can perform a QC (Quality Check) on one set of transcoded clips, and via a secure backup with checksums make sure that the copies are identical.

Which Formats Do I Need to Deliver?

There are two basic use cases that require proxies of the original camera media (there can be more when thinking about VFX or more complex workflows, but we are not going to dig into those now):

1. Viewing proxies (most of the time referred to as “dailies”): Those proxies are nowadays often distributed to mobile devices or cloud platforms on which the responsible team members can watch the recently shot footage.
2. Editorial proxies: These proxies go to the editor and allow him to start the edit of the film.

While these are the most common use cases, the delivery formats most of the time differ.
Dailies for viewing are most likely H.264 encoded clips in a quicktime or mpeg container. For these kind of dailies, it is important to pay attention to the data rate: Depending on the way of distribution you might want to make sure that the proxies have the best visual quality at the lowest data rate possible. This helps for faster transmission speeds.

The formats for editorial proxies depend heavily on the editing system. We won’t dig deeper into this topic here, but we’ve outlined it in more detail in our article “The Right Audio for Your Dailies: How to Create Proxies with Different Audio Settings” if you are interested. The article also gives you a better understanding of what might be required for different proxies concerning audio.

How Can I Deliver These Formats Fast ?

The baseline to take home is that the setup heavily depends on the source format. Each of it has its own requirements to accomplish optimal transcoding speeds and also requires hardware power in different areas. As an example: Using an externally attached GPU (eGPU) for processing ProRes 4444 to ProRes 422LT might even slow down your transcoding speed while it might push it through the ceiling when dealing with ARRIRAW source files.

If you want to dig deeper into these topics the whitepaper about automatic resource management will help you to better understand which hardware resources are required when handling data management and transcoding on one machine and how we addressed that in Silverstack Lab.

Providing proxy clips for different use cases quickly brings up the question about the metadata that should come along with them. Metadata can be a big help in grasping the context of a clip – this applies to every proxy and direction, may it be for the director or for the editor. The type and content of metadata as well as its form of delivery might differ though.

In Which Ways Can I Provide Metadata?

Metadata can be applied/composited onto proxy clips during transcoding. This is often referred to as a “burn in”. It can help to clarify a clip name or information about scene and take directly to the viewer. While certain information might be interesting for a director, it might be different for an editor. It makes sense to clarify these requirements in advance with the different departments.

Metadata can also be passed along in dedicated metadata files. This is especially the case for the metadata that goes along with the editorial proxies to the editor. To provide this metadata in a meaningful format you have to understand the workflow and in particular the editing application that is used. Two common examples of metadata that could be provided for the editorial is an .ALE (Avid Log Exchange) file for editing in Avid Media Composer or an XML (eXtensible Markup Language, FinalCutPro 7 type) file for editing in Adobe Premiere Pro.

In general, sharing as much information as possible logged on set about the delivered material will help everybody involved in the further production chain to do their jobs better and more effectively.

There are also many professional software tools that support you in every step of the transcoding process, such as our application Silverstack Lab. So feel free to experience our take on handling the outlined tasks in a single application.