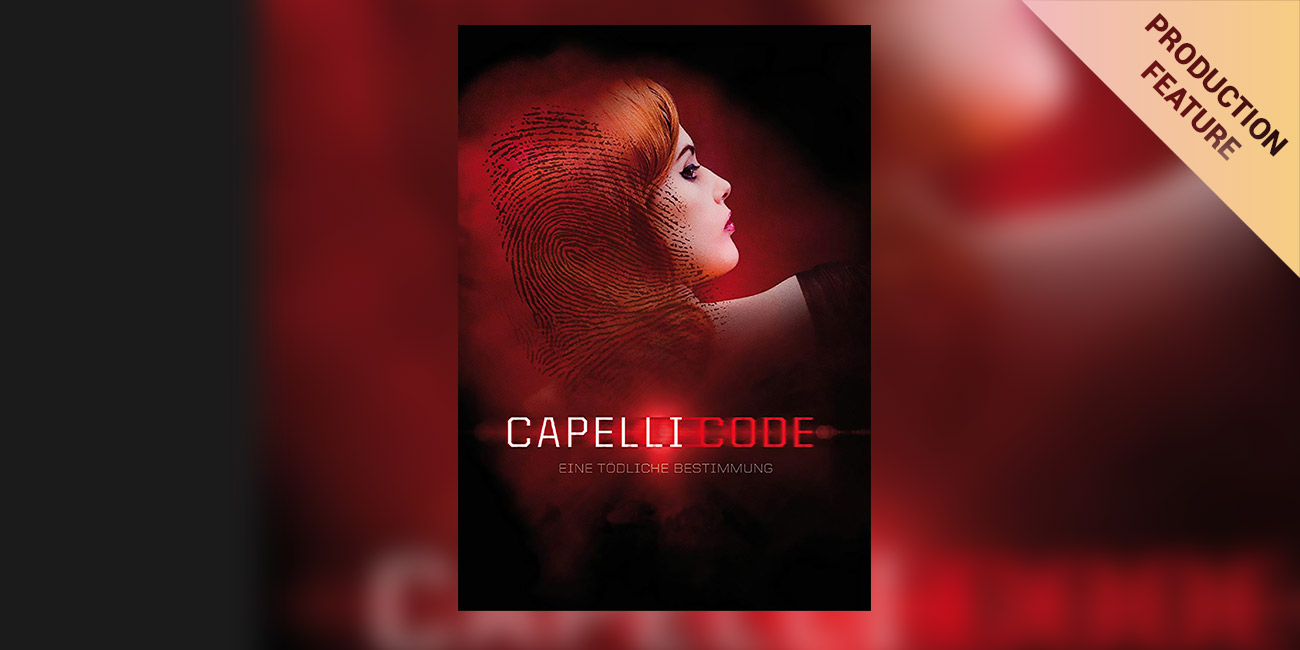 Getting all your technical equipment and the entire crew to the designated shooting location can easily become a challenging scenario, especially when shooting at remote locations with hardly any road access. That’s exactly what DIT Stefan Weßling experienced on the production „Capelli Code“, when he had to get his setup to a location in the Swiss Alps that was only reachable by a 45-minutes ride on a snowcat.

On this project Stefan was responsible for the footage of all units. He used the Silverstack Offload Manager and Silverstack Lab for offloads and dailies creation. In the following interview he shares some insights into this production, and explains how he was able to contribute his knowledge to make the workflow on set more efficient.

Hi Stefan, nice to meet you! First of all, thank you for sharing your insights into your  recent production with us. Can you tell us a bit about yourself and your work first?

Hi everyone! I didn’t start working in film production right away. After school I first underwent training as a bank salesman at the local savings bank. In 2013 I decided to do a cut and give it a try, making my film hobby a job.

I think everybody who joins the cine industry aims to become either an actor, director or DoP.
In my case it was the DoP, as I was really interested in things like how to capture a specific emotion or atmosphere. However, after several traineeships and student movies I discovered that checking out the tech stuff and helping the team perform a proper workflow was actually much more my purpose – and that’s how I ended up becoming a DIT and data technician.
I think as a data technician your role is a mixture  between a “butler” and a PC-Admin – It’s your job to prevent and in the worst case solve issues, so the artists can focus on the creative idea with the good feeling that their day’s work is in safe hands.
Every now and then, team members realize how important this work in that darkened van is and say „thank you“ in a meaningful way – that’s a cool reward.

Stefan working at his desk.

What kind of projects are you usually working on?

I am usually doing data management for TV features. At the moment I am in prep for a „Tatort“ featuring a subset of Bavarian investigators.
This June „Das Geheimnis vom Altaussee“, a WW2 drama, will be premiering in Munich – it’s an event-feature for which I’ve supported the DoP Carsten Thiele in all digital topics on set.
We shot on Varicam and EVA in 4K on that production, which brought my setup to its limit since I had heavily underestimated the demands on decoding AVC-Intra.

You recently worked on a production on which you used Silverstack Lab and the Offload Manager. Can you tell us a bit about this project? How did the team come together and what role did you play?

I was the DIT on the independent series „Capelli Code“, a hostage thriller taking place in Berlin and Switzerland.
The story is really thrilling and had a high production value. I hope there will be a 2nd season – because I want to know myself how the story ends.

In march we did some last B-Unit shots near our base in Reckingen (Wallis) while the main unit  shot for two days at the Weisshorn-Hotel about an hour away. You can only get up there via snowcat, which takes another 45 minutes and can carry max. 5 people at a time.
The rooms we could get there were also heavily limited, so we decided that I would stay with the B-Unit and prep an Offload-Station for the 2nd AC.
You can imagine that especially an independent production doesn’t have the financial resources for another “full” Silverstack-Lab license for the B-unit. Additionally, the sheer amount of features of  fully-grown DIT-Tools can result in the opposite of a safe workflow when the operator is not well instructed and familiar with the tool. That’s why we chose to go with an easy and simple solution.
I got green light for the Offload Manager quite fast, because it was inexpensive and we had zero issues with the big brother on the previous 120 days of shooting.

Also, I had previously run a few tests on the demo-version, for a police-highway series, where I helped production to improve their offload workflow last year.
This way I knew in which ways the Offload Manager behaved differently from Silverstack, and I could prepare the software in a few minutes.

Which cameras were used on this project?

A-Cam was an Amira, B-Cam was an Alexa Mini. There were countless days with additional Amiras and RedGemini. The Mini was later licensed for RAW-recording when we faced extensive VFX/ChromaKey shots. I was surprised how smooth Silverstack handled the ARRIRAW on just a 22“ iMac.

How was the decision to use Silverstack Lab and the Offload Manager made? Were there specific requirements for the use of the application?

It needed to be easy to use in a rush, because the 2nd AC had to take care of 3 cams spread out over two floors. I think that’s demanding enough. Since Silverstack is well known as a reliable tool, you do not have to argue that much, even in the production office, as you might have to for a tool from a competitor. And of course I appreciate that the look and feel is close to Silverstack, which is a benefit for the DIT.

Can you please briefly describe your on-set workflow? For which aspects of your work did you use Silverstack Lab and for which the Offload Manager?

Well, so the main iMac ran Silverstack Lab where I usually did the ingest on a LTO-Tape and a huge LaCie TB3-RAID. In a cascading copy I did a second run via Ethernet on the 2nd LaCie RAID attached to a Win10 Resolve workstation we used for RoughCuts and setting up the Resolve project for the edit (editorial note: Blackmagic Design DaVinci Resolve). The cascading copy was a really nice feature for this production because it didn’t thwart the main offload much and I could do the QC with proper performance while in the background Silverstack Lab copied on the network drive with cosy 80 MB/s.

Cascading copy is a great feature in Silverstack Lab. Most German productions hand 2,5“ HDD’s as Shuttle disks to their loaders. I assume everybody following the Pomfort blog knows the massive issues those devices have in the sense of I/O performance – with the cascading copy you can at least do the main backup on proper speed and set the shuttle in a second run while the SxS or CFast can go back to the set.

I refused to struggle with this anymore and bought a bunch of SSD’s and started to rent those to the production companies together with my wrangling machine. I’m letting them know that in the end they save money because I don’t block the generator, location-manager, driver and the location-lockdown hours after shooting has ended.

How did collaboration on set look like, in particular between the different units?

There were several situations where I would have appreciated some backup, but in the end I had to take care of the footage from all units (up to three units) in a near set workflow. As live grading is not common on German productions, look collaboration wasn’t a big deal. Content and lighting continuity became a major effort in the last weeks of shooting. I provided an android tablet to the assistant director at the main set, which was equipped with the biggest micro SD card you could buy at the time (512 GB), so it had barely enough capacity to take the dailies from over hundred days of shooting.

When the other units requested a solution I decided to set up a local Copra4 Server via Docker. The guys of Copra introduced this option to me a few months before. Now every team member with clearance could login to the server running on my reserve MacBook and make selected clips or complete reels accessible offline. The usual web-dailies solutions were no option because none of us had an affordable roaming fee for Switzerland. I made the local server accessible in the hotel WiFi and the issue was solved in a proper way without spending money for tablets or LTE mobile contracts.
I like the evolving metadata interface between Silverstack and Copra4. We had scenes fragmented and spread over a schedule of months – it was a big benefit that we could easily set up smart bins in the Copra4 iPad app and in a glimpse see the already existing parts of a scene we were going to shoot.
In March your team released the burn-in option for tint/wb/asa. It was the perfect moment. We made extensive use of it in all light-continuity dailies.

Were there any particularly challenging situations or setups on this production?

We had a lot of prop-footage I had to take care of. We had several surveillance cams, endoscope cams, helmet cams, microscope cams, and broadcast cams, which are also props.
Sometimes those images were needed live and we had to figure out a way to get signals from action cams to high end military devices which served as prop. Will see if my BMD-Micro converter makes it in the cut.
Worst case was an industrial IP-based surveillance cam driven by a proprietary PoE based main-unit which came without the recorder license on a Sunday shoot. The cam had to be set to DHCP with a special tool before any configuration attempt had a chance. This tool could only be started on a Windows OS and was delivered on CD-ROM. In the end I recorded the feed via my UltraStudio 4K II which was meant to be used for the QC, but it was the only device capable of recording a 60i 4K Stream I could get hands on in time.

I was also responsible for the rear projection. As the series is meant to be multicast-capable a lot of shots in Switzerland were done without cast – only background-plates. In the Studio in Berlin we then placed actors, vehicles and small set parts in front of a massive rear projection capable cinema screen illuminated by a 4K DLP projector. I supported the B-Cam operator Leo Kairat and the B-Unit gaffer Arne Weiss on the digital end of creating this illusion. For example we found out that you are only free of any artifacts if you set the Alexa to 60° shutter and the projector playback FPS on 29,97 at 12 bit. Good luck finding a HDMI cable for these specs on 50m of cable way.

When you think back to this project, what is your most memorable experience? What did you enjoy the most?

Maybe one day I’ll find the mental strength to solve out how many daily rates I’ve spent on Swiss cheese fondue. But this day is not today.

Big ‘Thank You’ to Stefan for sharing his experiences on this exciting project with us! 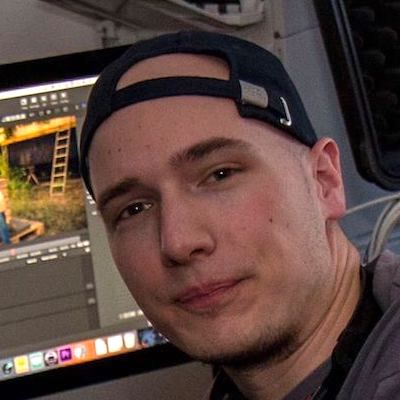 Stefan is a DIT and data technician based in Germany. Since 2013 he has been working mainly on TV features and TV series. One of his recent projects was the production „Capelli Code“, a thrilling hostage drama taking place in Berlin and Switzerland.