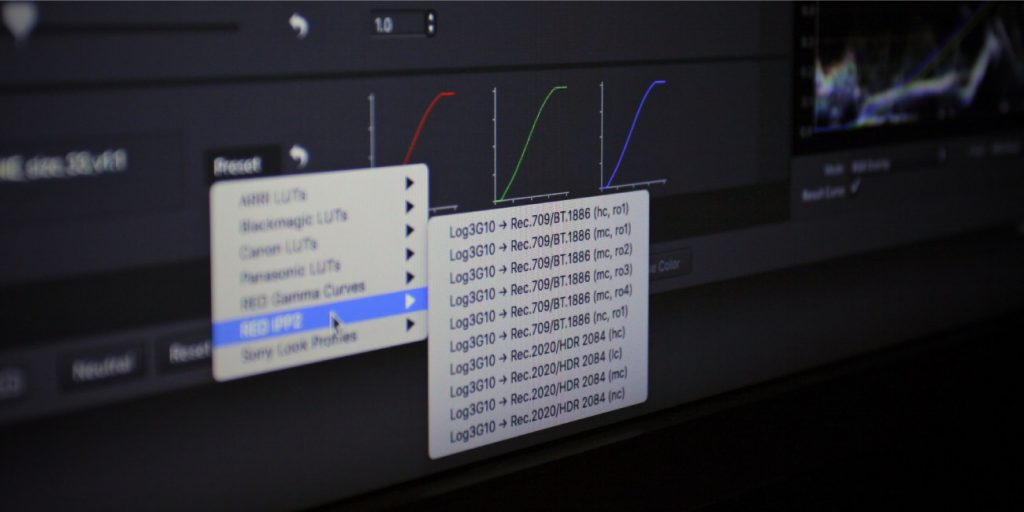 Part one of this article discusses the origin and ideas behind “log” images as produced in almost every camera system in digital cinematography.

In this second part we want to take a closer look at how you work with these images – be it as the “log” live output of the camera as an HD-SDI signal, or as the “log” footage recorded on camera media. We will discuss how to benefit from typical look workflows on set within the camera department and beyond. As the setup for dealing with log signals on set varies with the expected level of interactivity, we will illustrate the benefits in five scenarios:

The least interactive way of viewing material on set would be to offload the recorded footage onto a workstation. With the help of a software that allows the application of conversions, you can switch from log to video, e.g. during playback and transcoding. With the right format support in the software, appropriate playback functionality, and software-based video scopes, you have a decent toolset for inspecting the recorded footage.

This setup is suitable for productions with no live monitoring, or monitoring on very small screens, e.g. directly on the camera. A workstation or even a notebook makes it possible to inspect recorded footage independently from the camera.

When you offload your camera cards with Pomfort Silverstack, inspecting the recorded footage is just a click away. In addition to supporting all common cameras and formats, Silverstack also offers inspection tools. Those include for example the switching of lookup tables (LUTs) for viewing in both log and video appearance. Additional zoom and pan tools help the user inspect details of high resolution clips also on smaller screens.

2. Loading a Look / LUT into the Camera or Monitor

If ejecting cards and offloading footage causes too much delay between the shooting and seeing how the image actually looks like, you would want to use the live image of the camera. For most cameras you can load a creative look into the camera and then view the live image with that creative look applied on your monitor. More and more monitors also allow to load a LUT, so applying the log-to-video conversion can also happen directly in the monitor.

Monitoring with a fixed look set in the camera may work 80% of all scenes, but in the other 20% you might get stuck with this workflow. For a certain lighting situation, framing, or lens selection the fixed look might just not work and e.g. result in a too dark image. In that case the only solution would be to go to the camera and either disable the look in the camera completely, or switch to a less strong look such as the default log-to-video LUT of the manufacturer.

In this scenario, being able to interactively adjust the currently applied look on the log image instead of working with a fixed look is extremely helpful.

The most common solution for doing so is using a LUT box for the HD-SDI processing, and control the LUT box from a software, such as LiveGrade Pro. The software in that case would give you access to various looks and LUTs, as well as controls for finer look adjustments. LiveGrade Pro for example controls one or more LUT boxes. It also offers a broad range of features for adjusting the live image to match with different camera setups, lighting scenarios, and creative looks.

The more cameras are involved in a setup, the more challenging it becomes to maintain a consistent look of a scene without interactive manipulation of each camera’s image. Different camera models react differently to exposure and light changes, and different lenses and filters may introduce different color and contrast. In cases like this, interactively matching cameras for monitoring is a crucial task to get the color appearance of different cameras out of the way when judging framing and lighting.

In LiveGrade Pro you can easily add more processing power by adding additional LUT boxes to your setup to cover e.g. additional cameras. You can then match cameras to each other, or even compare live camera images with stored reference frames within the software.

Some camera systems also support so called “in-camera” grading, meaning that no LUT box is needed. In those cases the camera itself processes the signal and offers control from the outside via LiveGrade Pro. Examples for such cameras are the ARRI Alexa Mini and Amira, Panavision DXL2, Panasonic Varicam, as well as some RED and Sony CineAlta cameras.

Different productions, or even different situations within one production, might come with different requirements for viewing the live image.

When the DIT or camera assistant switches between activities during the day, different aspects of “viewing the image” become important: A log image might be useful for judging exposure on video scopes, while a clean video image might be better suited for comparing white balance between cameras.

In contrast, a customer on set will not be able to follow all these changes in image processing and be better served with a static, creative look that simulates the intended final result.

Using dedicated LUT boxes is the best solution when multiple of these requirements should be covered. The different LUT boxes can be routed as desired, so the DIT can work with a log image or a clean image, while the customer would see the image with a static look applied.

5. Applying a Look to Both Live Signals and Recorded Footage

This allows for a major additional benefit of log signals: The looks used on the live signal can be used directly for creating dailies. That way the image in the editing room can look exactly the same as the look on the DP’s monitor on set. This not only reduces time when creating color corrected dailies (as the color correction already was done on the live signal on set), but also gives the DP’s creative intent much more weight in the creative process of a film production.

The need for transferring and storing high dynamic range images with existing technology of 10-bit video led to the rise of log-encodings in digital cameras. Although a monitor can display such images, they are not intended to be viewed without processing. By choosing a suitable setup of hardware and software – chosen for the specific requirements of the production – the availability and proper use of log images can enable powerful workflows and strong benefits for the entire production.

If you are interested in reading more about “Log” Signals, have a look at part one of this article: 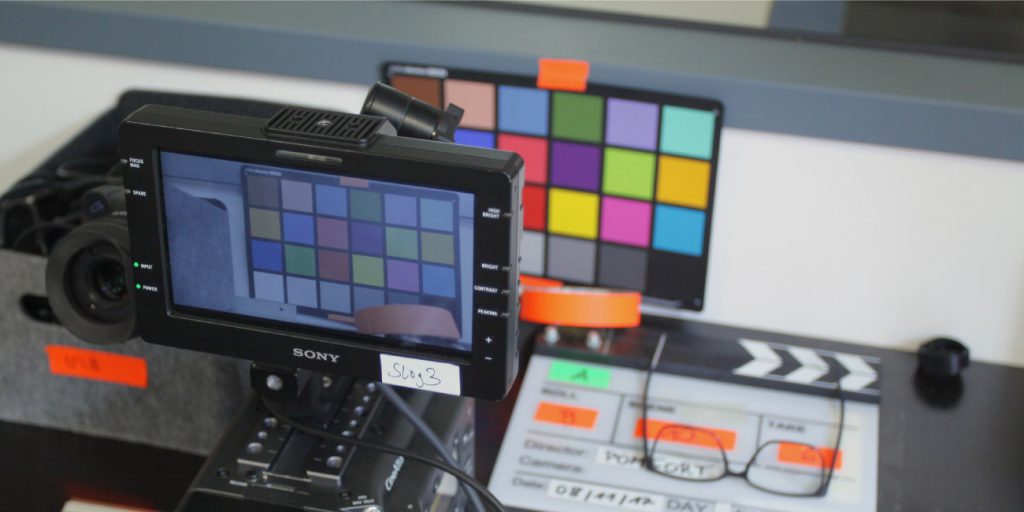