Capturing a live performance can be challenging – for the DP and camera assistant, as well as for the DIT involved. When Ryan Nguyen worked as DIT on the Netflix Comedy Special “Happy to Be Here” by Standup Comedian Tig Notaro, he had to make sure that 15 hours of footage from the night were secured, QC’ed and transcoded.

First of all, thank you for sharing your insights into this production with us. Can you tell us a bit about yourself and your career first (e.g. where are you based? How did you become a DIT)?

I was born in Sydney, Australia, and now live and work from out of Houston, Texas. I service a small commercial market down here along the south coast, first starting in 2013 when I did motion graphics, visual effects, and online editing full-time for a small local production company. Soon after, I started looking into the art and science of color grading with DaVinci Resolve and that eventually led me towards becoming a freelance colorist.

Fast forward to 2019, I now own a small color correction shop (huephoric.com) and work as a Digital Imaging Technician on set. It’s a common combination of work titles, since they both pull from the same knowledge base, just applied in different contexts. There is a wonderful synergy to be had, very much like how some Sound Mixers also on occasion work as Sound Designers in post. Adapting my computer hardware and post-production skills into the production environment has been one of the most rewarding career choices that I’ve made, including becoming a full member of C.S.I (Colorist Society International) and union member of IATSE 600.

However, there were and are still not many colorists or DITs in Houston, so my journey into becoming a working professional was at times quite lonely and challenging. I took to social media, which when used properly, became a powerful tool for me to connect with other members of the industry – the same people who I can now refer to as my friends and collaborators. With what time I have available, I publish articles for MixingLight.com as a contributing author and run local camera workshops for college level students. In a way, I’m only just getting started and am very fortunate to be brought up by a such supportive community and I’m looking into ways to give some of that back.

You used Silverstack Lab on a Netflix Comedy Special with Tig Notaro “Happy To Be Here” – can you tell us a bit about production? How did the team come together, and what was your role / task for the project?

Tig Notaro has a soft spot for Houston, so it made sense for her to host her comedy special here. She’d recently finished filming her Amazon Prime show, ‘One Mississippi’ down at Galveston Island just about a year ago. Before even traveling into Houston, the production company reached out to local technicians to fill out all the positions necessary for the job. I was called a few nights before the project started and was signed on as a Digital Imaging Technician. This meant being in charge of supporting the DP’s creative wants, and representing technical needs for post.

What cameras and formats were used for filming? How many cameras were there in total?

The comedy special was shot with 5 x RED Weapon Dragons in 5K HD at a 5:1 REDCODE ratio. Each camera was manned by a separate 1st and 2nd AC combination, with one ‘Key 1st AC’ working closely with the DP to overlook and supervise the entire set up. The cameras were spread across sticks, dollies, and cranes to cover the stage. At the time, IPP2 was just barely becoming a thing, so we stuck to Legacy RedColor Science. After dialing in the look we liked on the center camera, we matched all the other cameras to the same settings for a consistent look.

Can you tell us a bit about the shoot itself? How was production like?

Tig Notaro ran her stand up sequence twice on the night, each going for about 90 minutes with a short intermission between. This meant that by night’s end, there was about 15 hours of content to offload, QC, and process. Every member of the camera team was of course on radio, receiving framing instruction from video village, and communicating amongst each other as the show went on. For the most part it was a very smooth production, so that was refreshing.

On this production you worked with Silverstack Lab. How did you decide on the software?

I use Silverstack Lab for every job, by default. I have a yearly license to use the software that renews all the time, so it comes with me everywhere I go. Whether it’s for a small one camera job, a three camera commercial, or a five camera stage show, I can always count on Silverstack LAB to help me carry everything through from set to post. It really is a testament to how flexible the program is for almost every use case scenario in the film and TV world.

The cameras did not cut during the show, we only reloaded between the two scheduled performances. As soon as the cards hit the cart, I began work straight away, verifying the material from off the Red Mini-Mags to three separate RAIDs. Securing the footage was top priority, and knowing that there was not going to be enough time to run transcodes before the next round of cards would show up, I decided to focus on that first. Without a second DIT or workstation, the transcodes would have to be done next and that was our strategy.

How was communication on set and with the post house? What assets did you hand over to post production at the end of the day?

Speaking of, the requirements for transcodes were determined much earlier on before the shoot even started – which they should always be. We organized a phone conference call with Apache (apache.com), who were on to finish and master the comedy special. We discussed everything from folder structure, audio channel assignments, down to the little things such as providing R3D/TIFF snapshots. It’s this exact type of communication that answers easily preventable assumptions ahead of time that make for a smooth production experience for all involved. The transcodes were encoded in ProRes Proxy at 1920 x 1080, 23.976fps with sync sound. The offline edit was done in Premiere Pro, and then forwarded to Apache for finishing.

How was your general experience with Silverstack Lab on this production? Were there any features that you used particularly often, or that were very helpful?

It’s not a feature I necessarily use all the time, but with only a couple of readers and the onboard I/O limitations of the 2013 Mac Pro, using Silverstack Lab’s unique ‘cascading copy’ function was a real time saver. This meant that I was able to release a magazine after doing only one copy, and start downloading the next magazine while the single copy from one enclosure duplicated the material to the other two on the back end. Because we were not formatting cards and holding them until the hard drives made it to post, if an issue were to arise (thankfully, none did), we would still have the exposed magazine to retry the download as part of a contingency plan.

After the show wrapped, the theatre was closing down and I had to move my work off-site. Being able to pause and resume tasks within Silverstack Lab gave me the confidence to make the location move without breaking a sweat.

If you think back to this production, what would be the most memorable thing that comes to your mind?

Commercials in Houston means a big variety of locations and company moves, so working on this show was a good break and the closest thing to a stage shoot that I’ve been on. Tig Notaro’s flavor of deadpan observational comedy is just my type of laugh, so that was a solid plus as well. If you happen to come across the special while browsing Netflix, I recommend giving it a watch!

Thanks to Ryan for sharing these very interesting insights into this stage shoot with us! 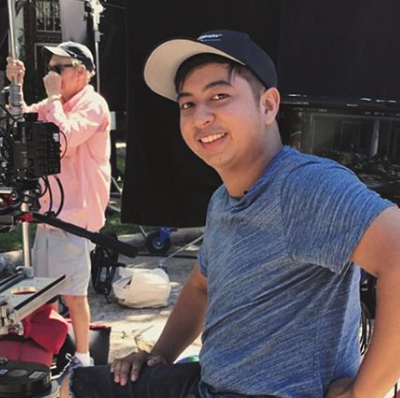 Ryan Nguyen is a DIT based from out of Houston, Texas. He mainly works on commercial productions. Whenever he finds some time he publishes articles for MixingLight.com, and runs local camera workshops for college students.