While the characters in “Blackout” battle the consequences of a Europe-wide power-cut, the show’s central topic also created challenges for its creators: How do you shoot a series that’s mainly set in darkness?

The responsible DIT Severin Schultze takes us behind the scenes – some of which were only lit with smartphones or construction battery lights! Cozied up in his mobile grading suite, Severin relied on a workflow with Silverstack to ensure all chaos was limited to the action on screen.

First of all, thank you for sharing some insights into your productions with us. Can you tell us a bit about yourself and your work first?

I’m based in Cologne – Germany. I studied sound and image engineering at the University of Applied Sciences Dusseldorf and started my career as an intern at a post-house in Cologne, where I wrote my diploma thesis comparing 35mm post workflows to the post workflow of the RED One Camera. Back then, the S35mm digital cameras were quite new, and all the post-work had not been established and was quite quirky sometimes. But that’s been a great opportunity to connect to a post-house since they were already involved in the first RED One projects in Germany back in 2008/2009. So I was able to help build workflows and workarounds in the post-house and work on set as a DIT. After graduating from University, I started as a DIT, Dailies Colorist, and DI Operator at the post company where I’ve been working until 2013, when I started freelancing as a DIT and Dailies Colorist. Since 2013 I have enjoyed working on sets as a DIT and Dailies Colorist as well as freelancing as a DI Operator in different post-houses all over Germany.

What kind of projects are you usually working on?

I’m not into any specific direction. I’m doing commercials as well as features and TV series. From time to time, there are nice and challenging multi-camera projects – concerts and festivals, which I really enjoy as a musician. I need the alternation. I couldn’t do just one or the other – I’d definitely miss something. And with family, it’s definitely hard to just do long features/TV series abroad without seeing the kids. So I’m trying to balance the types of projects as well as possible.

You recently worked on a production called Blackout, on which you used Silverstack. Can you tell us a bit about this project? How did the team come together and what role did you play?

Blackout is a 6 part series that has been produced by Joyn, SAT1, and W&B Television for the German streaming platform Joyn PLUS+. I’ve been called by my friend and long-time collaborator – DP Kolja Brandt. He asked me to join the camera crew on this project. It’s been set up as a two-camera show, and it’s been a traveling production. So for workflow reasons, it’s of great help to have all the data management and the backups done on set. It’s also been split up between two units – so two directors and two DPs. Therefore, production and Kolja really liked to work with a dailies colorist on or near set to establish the look of the show, for fast dailies turnarounds, and to be more flexible to check look consistency and continuity. So I’ve been working 66 days of principal photography on set, doing all the backups and the data management, coloring the dailies, and distributing all the assets to editorial and fed the online dailies system.

Which cameras were used on this project?

As I already pointed out – the show is set up as a two-camera show. We used two ARRI Alexa Mini LF as the main cameras within both units. But there have been several 2nd unit stuff from Malta, Italy, Austria, and Germany. So there have been several ARRI Alexa Minis involved as well as different kinds of drones and small surveillance cameras / GoPros. The acquisition format has been ProRes 4444 UHD for all ARRI cameras – framing a 2:1 aspect. There has been Cinema DNG 5.6K from the DJI Inspire 2 drones – flying X5 and X7 cams. The surveillance cams were all captured by external recorders in ProRes. So it’s been a good mixture of codecs, resolutions, and frame rates.

How was the decision to use Silverstack made? Were there specific requirements for the use of the application?

For me, Pomfort’s software lineup – in this case Silverstack – is the must-have piece of software to perform easy, comfortable, fast, and secure backups and be able to keep up with lots of data being acquired – time-wise and metadata wise. Handling different units during a long shooting period always and at any given time needs a good overview of all kinds of information – so metadata handling is crucial. Especially for VFX heavy productions being able to respond quickly to questions from production, VFX dep., the other units, etc., is a great benefit. And since it’s all possible within Silverstack, it’s always just one or two clicks away. Tracking down “lost” or faulty cards, getting camera metadata for continuity or VFX department, calculating drive space for splinter units, etc., is a great benefit for most crew members. Since we had data wrangler on splinter units, I tried to use ShotHub, which was in early beta these days. There have been some hiccups that were beta-related – but I’m very much looking forward to using this tool to help organize and manage more ingest machines or workflows with more than one data hub. This has been a great step by Pomfort to close that gap.

Can you please briefly describe your on-set workflow on the production? For which aspects of your work did you use Silverstack?

Since I’m not on set doing live grading, I’m able to have my own call, and I’ve set up my “Lab” always near set and would start a bit delayed to the rest of the camera crew. Right in the first step, I’d use Silverstack to ingest all the data into my dailies pipeline. Silverstack really helps to get the daily tasks mostly out of my way using wildcards for the offloads. I did three copies of all the assets coming to my “Lab” – two ARECA Thunderbolt3 Raid5 Systems – and one SSD. It’s really fast and comfortable to cascade the copy jobs – so I had super fast offload times. While offloading, one essential part of digital workflows for me is the use of metadata. On this shoot, I just took the data from the boards and from sheets I got from script with additional “analog”  information like filters, etc. I just merged everything into the project database, which is the essential part of the data handling. As the shooting days flew by, I always have been able to answer all questions regarding specific clips in just a second. As I mentioned before, there have been different units shooting in different countries. There have always been requests for stills, settings, and tech specs for continuity reasons. In the end, I’d export all the metadata as .csv for DaVinci Resolve.

How was your overall experience with Silverstack like? Were there any features that you used frequently, or liked in particular?

As always, I felt really comfortable using Silverstack as an ingest and metadata management tool. All the processes are really well thought out, and it supports me in the workflow really well! Because of the different units shooting in parallel with a handful of crews, I really used the smart-bin feature a lot. It’s really handy to get every single piece of information in the database sorted and filtered, which helps a lot in matching shots, getting visual references, feeding the VFX department with information, and so on. I also used the metadata export a lot to pipe the metadata into DaVinci Resolve, which I used to render all cloud dailies and all for editorial. All the metadata is being used in Resolve to have the whole project organized and to streamline all the exports with just one metadata input in Silverstack. Also, ShotHub’s features helped me integrate the 2nd Unit footage, wrangled by a data assist on a second machine. Although I used it when still in the beta phase, I really appreciated the easy transfer/sync of all database entries between different machines and am really excited to see this tool be tied entirely into Pomfort’s ecosystem.

Were there any particularly challenging situations or setups on this project?

Yes – on the creative side. The show is set in darkness – a significant part of the story is told while there is actually no power besides battery-powered devices, cars, and critical infrastructure, which obviously uses generators. So it’s actually really dark, and it’s been a challenge for the creative heads to figure out the right balance and how far to go. We had quite a few discussions at my van about the light levels and how dark they actually should be. So there are scenes that are lit with just smartphones or construction battery lights. This worked out really well but needed some fine-tuning and discussions between the DP and his Gaffer while grading dailies.

When you think back to Blackout, what is your most memorable experience? What did you enjoy the most?

This show had a good amount of night shoots on location during the fall, which has been quite exhausting over the course of 66 shooting days. But it has also been the first long production with my new “LabOnSet” van, which has been so easy and comfortable to work in – I can’t think of any other environment to work on set now. It’s actually a camper van that I can turn into a really cozy and nice mobile grading suite. Having comfortable seats for two guests and some cold beverages at hand, working after wrap is not as bad as it used to be :-). And I just need to pull the power line and remove the blackouts, and I am ready to move. This production has been the test for this setup, and I’m really happy that it worked out perfectly fine!

Big ‘Thank You’ to Severin for letting us be part of this exciting project! 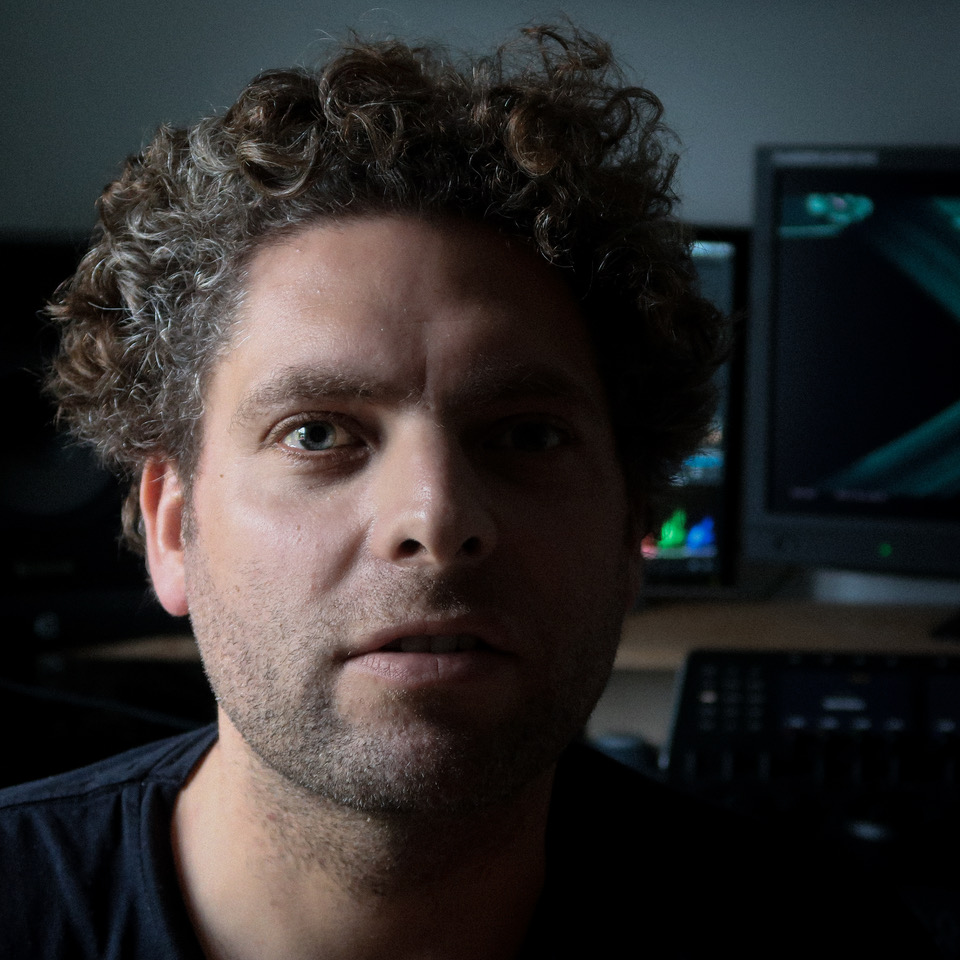 Severin Schultze is a DIT based in Cologne, Germany. He was already active in the film industry before digital cinematography became the standard. Hence he could build up his expertise as DIT, Dailies Colorist, and DI Operator right from the start. In the meantime, he works freelance mainly on commercials, feature films, and TV series.