When working on set, DITs are often responsible for delivering a whole package of services. This often goes beyond the offloading and securing of footage. For his current production “Gelukzoekers”, DIT Thijs Bazelmans’ responsibility on set included handling the whole process from live grading to the final handover of material to post production.

We talked with Thijs about his on set workflow for this production and some of the challenges he has to overcome. In the interview Thijs explains how ACES enables a seamless matching of colors on set and in post, and how being able to sync sound in Silverstack Lab makes things easier for him.

Thijs, can you tell us a bit about yourself and your career first ?

I was born and raised in the Netherlands where I went to school for editing and animation. I then moved to San Francisco to get my masters in Film Directing. After graduating, I moved to Los Angeles, where, like so many others I didn’t immediately find work. Until one day, my girlfriend (who is a producer) was on a production where the DIT left, a day before they started shooting. Knowing I had a strong post background, she got me an interview that same day. After a long night of research, I was grading dailies on set the next day. It was a small TV movie, but apparently I did a good job, as that company hired me for at least a dozen more movies. The DP is also still one of my regular collaborators.

Now a few years later, I still direct and edit when I can, but DIT work pays my rent.

You are currently using Silverstack Lab and LiveGrade Pro on the Dutch production “Gelukzoekers”- can you tell us about production and your area of responsibility on set?

Gelukzoekers (Fortune Seekers) is made by the Amsterdam/Los Angeles production company Corrino. I have worked for them in the States on several occasions. This is the second time they invited me along on one of their feature film productions. In January we shot a movie in Jordan, while Gelukzoekers is entirely shot in the Netherlands. For most Dutch productions, data and on set color are still largely within the domain of 2nd AC’s or PA’s with a laptop. However, the producers at Corrino have seen first hand the benefit of having a designated DIT on set, while I worked for them in the US. They’ve decided to take that with them on their Dutch productions.

Also, both DP Aage Hollander as well as post house Filmmore, were very excited to test out new workflow opportunities that opened up with the addition of a DIT to the team. Especially since the turnaround time is very short, to get this film ready for both theatrical and television release. In this case there is only four months between the last day of shooting and delivery of the final film. Most films I worked on have at least eight months to deliver.

With regards to my responsibility on set as a DIT, I live grade and data manage. I prep all the files so that the post house can make dailies and proxies overnight.

What cameras and formats are you using for filming?

This is a one camera show. The main camera is an Amira. We’re using a Varicam for some exterior night shoots. The main shooting format is ProRes XQ.

Let’s talk about live grading: What LUT boxes and devices are used on this production?

I am using one Teradek COLR. On-camera, controlled by Wifi, so that the DP/Operator Aage Hollander can see graded images everywhere except for in the VF. Only the main camera gets monitored. We never use the Amira and the Varicam at the same time. So only one device is controlled by LiveGrade at any given time.

I like working with the COLR on the camera as it gives me direct access to most camera settings from my cart. It is especially useful when the DP is also operating: He/she can see the changes I make on the onboard monitor and neither of us has to walk back and forth to the cart or the camera. However, since we shot most of this movie inside an abandoned prison, the reinforced walls did give us some WiFi troubles. You tend to lose connectivity right when you need it most. Usually that’s because a few extra people gather around the camera right before shooting, interrupting an already weak signal. I solved this with a bunch of cheap Wifi extenders in every socket I could get close to camera. 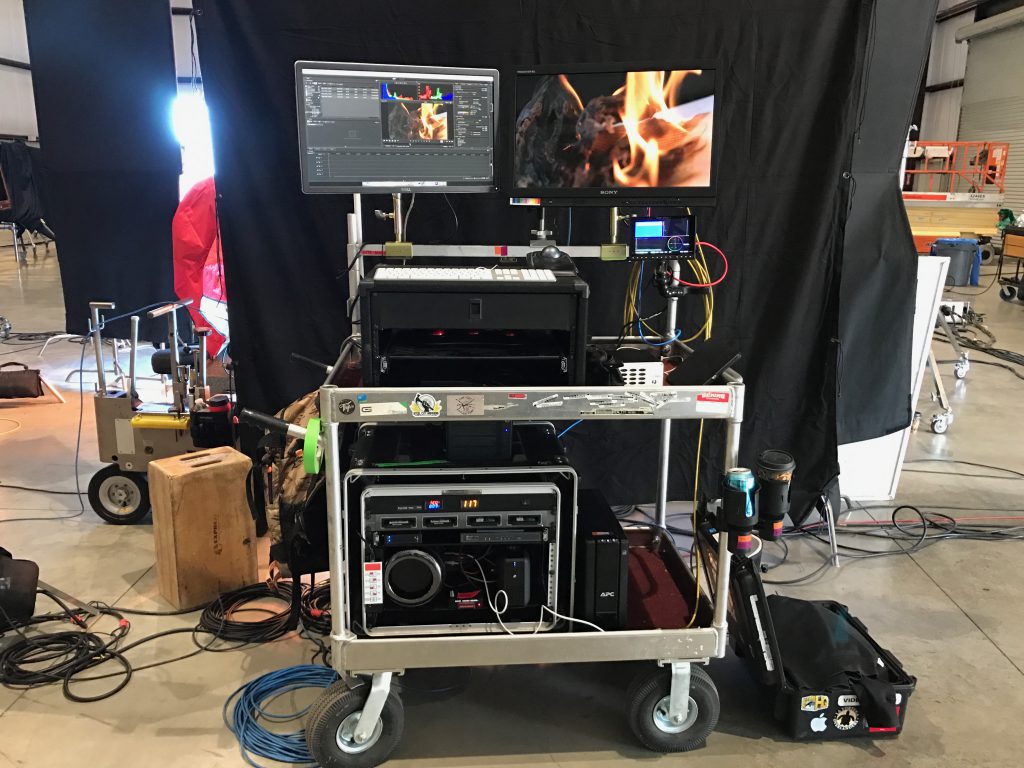 You mentioned before the interview that you’re using the ACES workflow for this production. How does ACES work as a framework for your on set color pipeline?

Me and the DP came into this project wanting to live grade. However, Filmmore had already set up a post workflow in P3, while on set monitoring is all in 709. In order to make sure we are all looking at the same thing, we decided to grade in ACES on set, and keep this going throughout the post process. This also made the switching between Amira and Varicam easier and smoother.

Because the proxies already had the look I created with the DP baked in, the editor didn’t have to do any color correction for preview purposes. And because this was all done in ACES, when the DP finally walks into the coloring suite, he sees all the footage exactly the way he made it on set, even though it’s in a different color space. In my experience, this gives everyone more confidence throughout the process. We all really know what we got. There are no surprises. And this saves the DP from putting any footnotes with early cuts, as the film won’t look all that different between early cuts and final color.

Working within ACES is not that different from working in 709 with LUTS. I was already used to saving a lot of looks in the LiveGrade library, and then reusing them on later days. A CDL with an input and output transform, is not that different from a CDL with a LUT. You just have to be a little sharper on what you’re shooting (ISO wise) and what you’re outputting to, but it gives you a lot of space to work with.

So far it works great. The editor is happier because he gets to work with better looking, nicely balanced footage. He doesn’t have to spend any time on making any first cuts look presentable as, at least color-wise, they already are. The producers and director are happier, as they get to look at better quality dailies. And the post house and the DP are happier, as they don’t have to spend time on color in this part of the process (except for with me on set), and they can deliver a more polished product, this early in the process. Which makes everyone look good.

In practice, the DP and me color the footage on set and I don’t communicate much with the post house anymore since we started shooting – except through CDL’s and reference stills (we did a few pipeline tests beforehand).

ACES is not really making the handoff to the post house any different. When working in 709, I delivered CDL’s and usually a few LUTs. Now my responsibility on set is just delivering CDL’s. It means I am working a little differently in LiveGrade, by making my own CDL presets that I use as a base to grade from, instead of grading with CDL’s before a LUT, but that’s not a huge change either. So I really see only benefits so far.

Besides live grading you’re also doing data management on this production, using Silverstack Lab. Could you tell us a bit about that? How far is your responsibility on set going with regards to managing data? E.g., are you also doing the dailies on set?

Dailies and proxies are transcoded by Filmmore. I deliver Raw footage, CDL’s and some reference stills for verification. I used to have to manually punch in slate information as metadata. But by syncing the sound, Silverstack Lab brings shot and take info along from the audio files. Filmmore preferred keeping their current workflow of rendering dailies in DaVinci, and proxies in AVID. Therefore my responsibility on set is that I export for both programs out of Silverstack Lab and supply metadata and CDL’s. So far, we haven’t had any issues transferring over all the color info and metadata at all.

So you’re syncing sound in Silverstack Lab and applying looks from LiveGrade before exporting to post tools?

I make shot-by-shot CDL’s in LiveGrade, that I export to Silverstack Lab as a Pomfort Look Archive. It’s really only a couple clicks per camera card so all the CDL’s are matched up. I spend a little time matching / fine-tuning the color of the different setups in Silverstack Lab before I send it out to post together with synced sound and metadata. This pretty much sums up all my responsibility on set.

In detail, that’s basically my on set color and data workflow with LiveGrade and Silverstack Lab:

Silverstack Lab is still a relatively new product. Has anything changed in your on set DIT workflow since you upgraded to Silverstack Lab?

It is now even easier to deliver the whole package, neatly tied up and ready for post. Silverstack Lab’s improved export functions have been a tremendous help, as well as the sound syncing possibilities. Before, I had to jump between a couple of programs to get everything ready. Now, I am down to handling all my responsibility on set using only LiveGrade and Silverstack Lab. This is saving me a lot of time, especially at the end of the day, after wrap, when everyone is trying to get home!

We’d like to thank Thijs for these very interesting insights into his work! 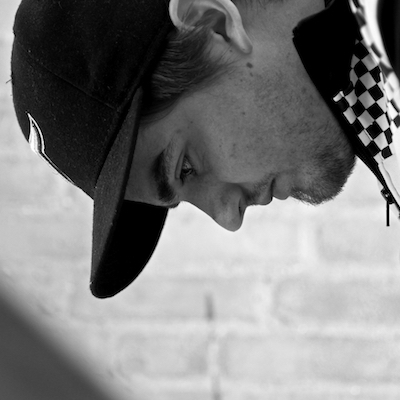 Originally Thijs started his career in Film Directing, until a coincidence led him to become a DIT. Today he mainly works as a DIT on various international productions.