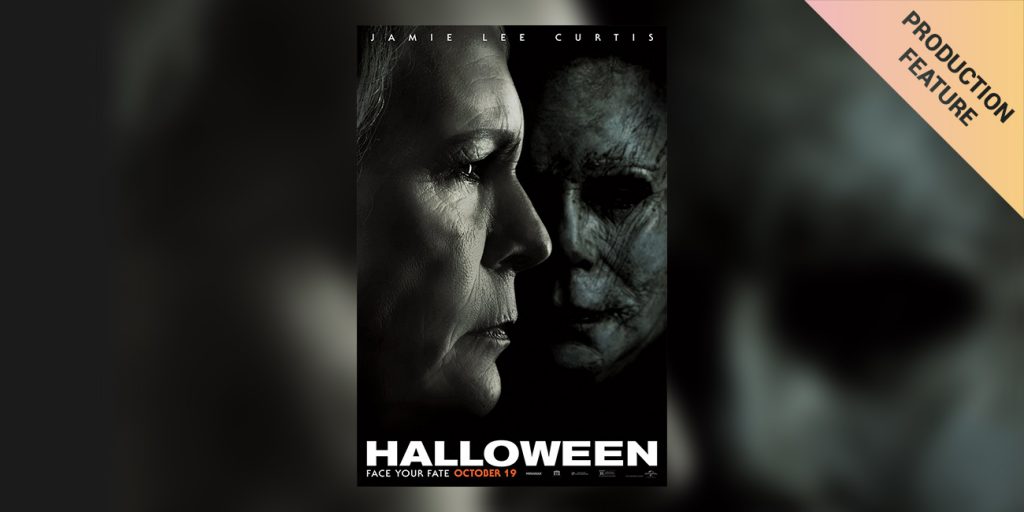 Horror movies are a genre of their very own, captivating viewers with their extremely thrilling and often dark and gruesome story lines. Out of the many horror movies out there, few manage to do this as well as the “Halloween” movies. And the movie series’ newest addition is no exception to that.

Andy Bader worked as main unit DIT on the new “Halloween” movie. In the following interview he shares some insights on the production. He talks about the specific challenges of shooting on location at night, and explains how LiveGrade Pro helped crew members make sure nothing was “hiding” in the shadows.

Hi Andy, thanks for agreeing to this interview! To start off, can you please tell us a bit about yourself ?

Andy: Thank you for reaching out! I’m a DIT based out of Wilmington, NC. I moved here from the Raleigh area in 2001 to enroll in the then-new film studies program at UNC Wilmington, and I’ve been lucky enough to live here since then. I work primarily in the southeastern US. I enjoy traveling and exploring new locations, but lately I’ve been working near home as much as possible to be close to my wife and young kids. 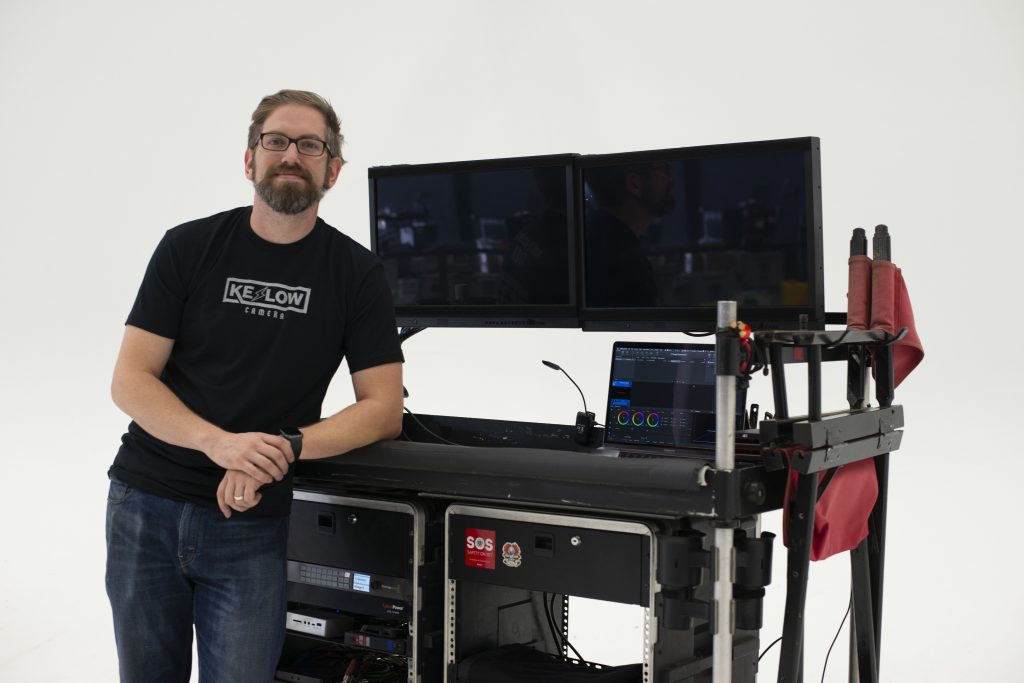 DIT Andy Bader at his cart

You’ve recently worked as DIT on the feature film ‘Halloween’. What was your role for it, and how did the team come together?

Andy: I was the main unit DIT for principal photography on ‘Halloween’. I had worked previously with DP Michael Simmonds on season two of Vice Principals. This was the first time I’d worked with operators Paul Daley and Stew Cantrell, as well as 1st AC Justin Simpson. However, I’ve probably done a half dozen jobs with 1st AC Matthew Mebane, 2nd ACs Justin Urban and Emily Rudy, and utilities Nick Brown and Grace Chambers. We had such an excellent crew: Great to work with and talented at their jobs. We had to hit the ground running quickly after a blizzard made us push, but everyone was up to the challenge.

On this shoot you worked with LiveGrade Pro. Was LiveGrade Pro set for you from the beginning or did you consider any alternatives?

Andy: LiveGrade Pro was my choice from the beginning. I’ve used LiveGrade Pro since I started DITing seven years ago. I’m a big fan of the recent v4 update. It added a lot of functionality while remaining intuitive. The customizable keyboard shortcuts were a very nice touch. I’ve looked at alternatives, but I’ve really come to appreciate the excellent support Pomfort provides, and I wouldn’t want to give that up. 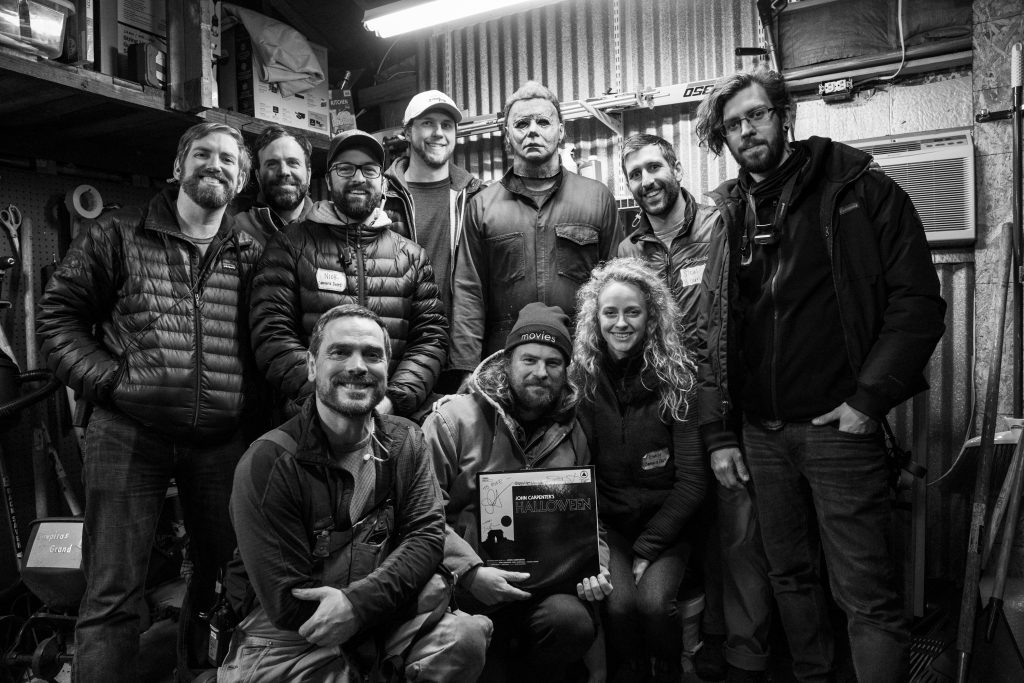 Let’s talk about the hardware setup. Which cameras and camera types were used on the project?

Andy: We had three cameras, all ARRI Alexas. A camera and C camera (Steadicam) were Alexa SXTs (shot in 2.8K ARRIRAW), and our B camera was an Alexa Mini (in Open Gate ARRIRAW). Michael and the operators wanted a little variety in the sizes: a little weight for the Steadicam, and flexibility in size and configuration for the B camera. We also used a Sony a7s II to shoot security camera footage around Laurie’s compound.

How about LUT boxes?

Andy: I used a Flanders Scientific BoxIO and a Teradek COLR on my cart. The ability to switch the BoxIO into dual channel mode was helpful for the occasional three-camera setup. I was able to break the COLR away in situations where I wasn’t able to bring my cart — driving work, for instance.

Andy: As you might expect for a horror film, there was a lot of night work. We shot almost entirely on location. We had a lot to shoot on a short schedule, so we had to hit the ground running almost every day. There was a surprising amount of rain for January, and we had no cover sets, so we were shuffling scenes around to shoot them as weather permitted. There were a few scenes where we had to shut down the generator for lightning nearby, but Michael was able to adapt his lighting setup to be completely house- and battery-powered, so we were able to keep shooting. 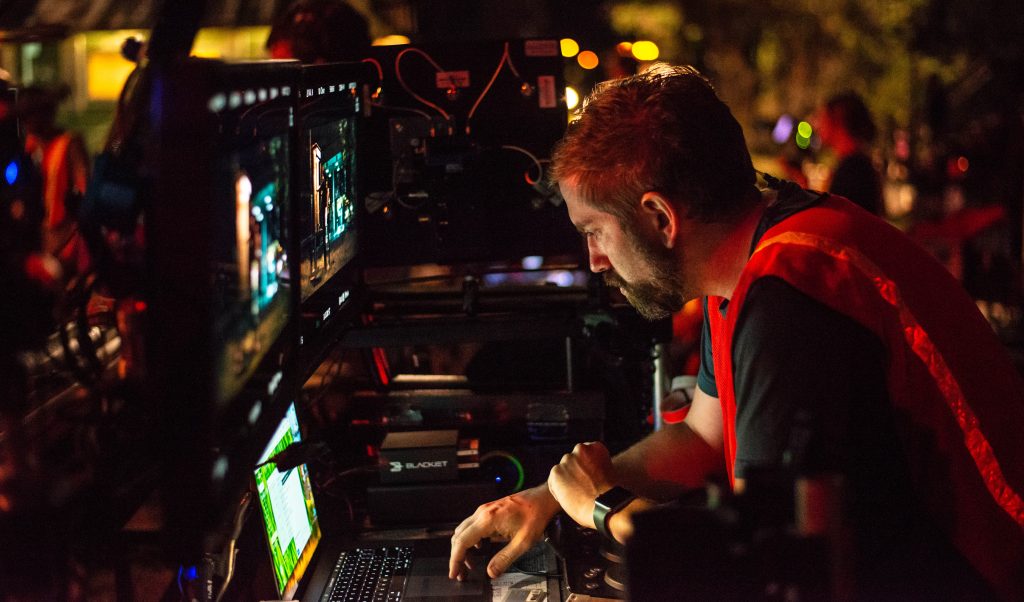 Andy Bader working on his cart

How was collaboration between Michael Simmonds and you on set?

Andy: I really enjoy working with Michael. He’s got a strong visual style of his own, but he’s open to ideas. I remember our very first setup was a run down gas station, shooting day-for-night. It was lit with the original consumer fluorescent bulbs. I asked Michael if he’d prefer me to dial out the natural green tint of the bulbs or to lean into it. He just smiled and said, “Why don’t you show me something cool?” He always preferred to do something interesting instead of just playing it safe, which I appreciated.

Andy: Our dailies were handled by Company 3 in Atlanta. Dailies colorist Gabbii McIntyre was my liaison every day to make sure all the footage made it there safely and everything looked as we expected. We used a CDL + LUT workflow with frame grabs taken from my cart as reference.  She was invaluable as a second set of eyes and to keep us consistent under shifting lighting conditions. Dailies producer Scott Salamon was instrumental in verifying LTOs and clearing media safely in a variety of circumstances.

Was there any particularly challenging setup for LiveGrade Pro on this shoot?

Andy: There were plenty of challenges on this show, but thankfully LiveGrade Pro wasn’t one of them!  There were a few tight locations that we couldn’t get my cart into — the attic of Laurie’s compound comes to mind — so Michael wasn’t always able to break away to my calibrated monitors (Crew members were constantly asking if we could adjust the brightness of the on-set so they could see what lurked in the shadows…). Being able to send false color down the line with one key press was very handy.

We had about a week of reshoots, which I was unfortunately unavailable for. We were lucky that DIT Jason Johnson was able to come in to save the day. Exporting my whole catalog of looks was simple and gave him a day-by-day breakdown of our setups. 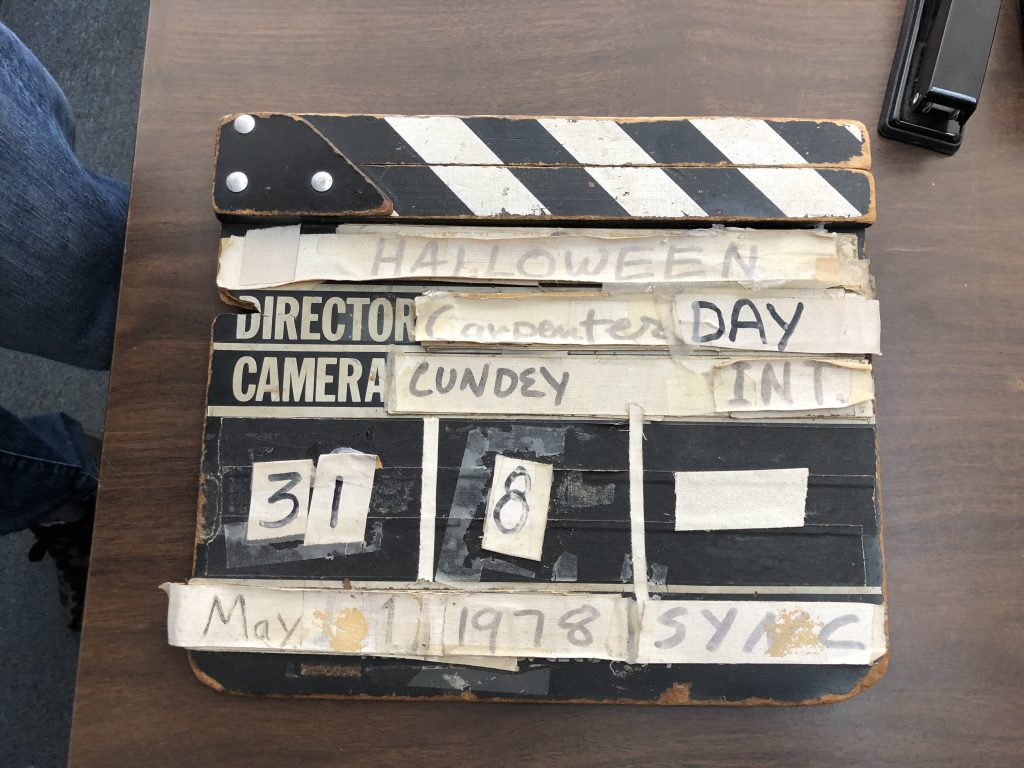 The original slate from 1978

If you think back to the production, is there a certain scene, or a certain event, that comes to your mind?

Andy: I’m a sucker for a well-choreographed “one-er,” so I really had fun on The Shape’s murderous rampage through the neighborhood on Halloween night. Utility Grace Chambers was ducking into alleys, chasing the Steadicam with a Teradek receiver trying to keep a good signal, while I was riding the exposure all the way through.

We shot much of The Shape’s escape from the prison at a working prison in South Carolina.  Watching security guards dig through my cart and check the underside of the camera truck with mirrors wasn’t something I’d envisioned coming into the job.

On Jamie Lee Curtis’ first day, she brought out a souvenir she’d kept from 40 years ago: Dean Cundey’s personal slate from the original Halloween, covered in layers of tape from old jobs. I was very, very careful holding that one! 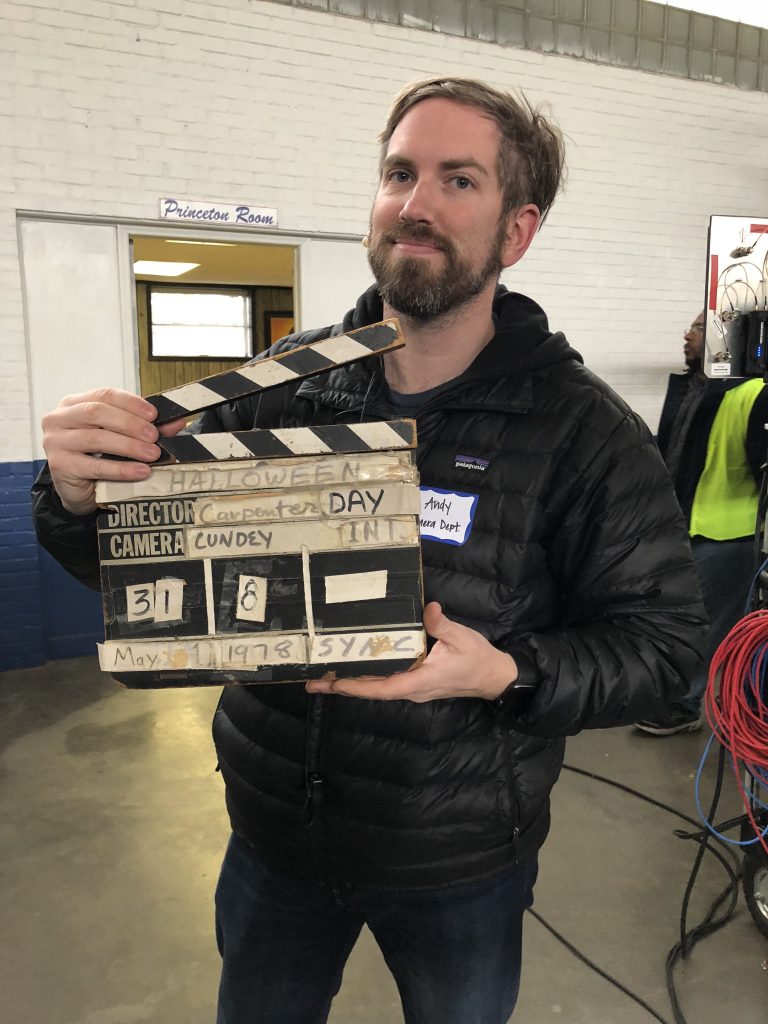 Many thanks to Andy for sharing these insights into the production of ‘Halloween’ with us! 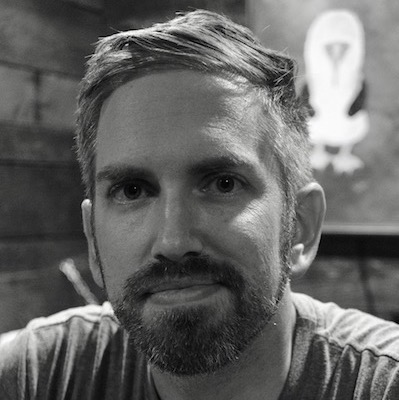 Andy Bader is a Wilmington based DIT. He has been working on various feature films and TV series, including Iron Man 3, Vice Principals, as well as the recently released movie Halloween.