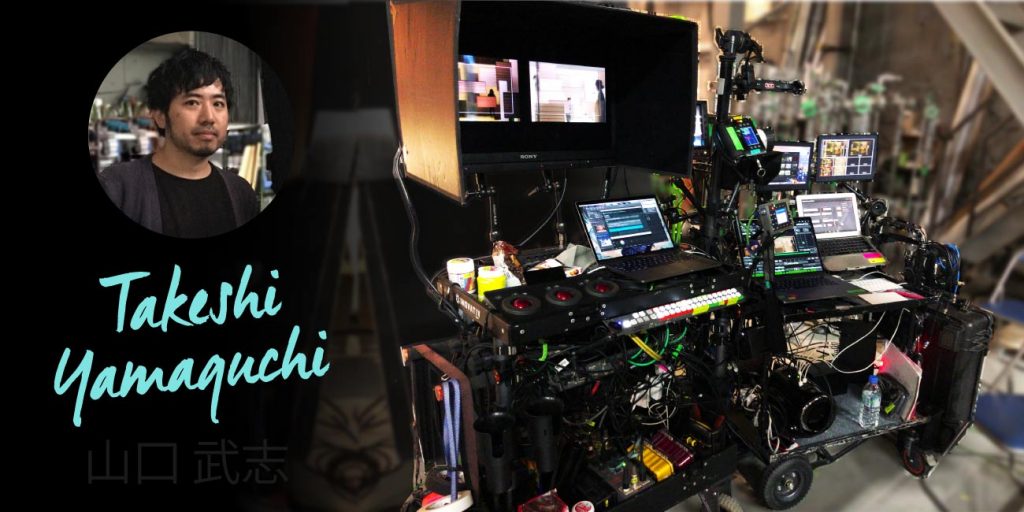 DIT carts are used in a variety of different settings. Sometimes there is space for a cart that’s large enough to host your entire equipment, while other situations require a more compact and mobile setup.

In order to best meet the requirements of all those different settings, Takeshi Yamaguchi works with three different carts. The Tokyo-based DIT works with his main and second cart for studio settings, while for outdoor settings, he designed a much more compact cart.

In the following interview, Takeshi shares some details on the setup of his three carts and explains why good communication on set is his personal key factor for success.

Hi Takeshi, nice to meet you, and thanks for doing the interview with us! To start, can you please tell us a bit about yourself?

Hello, everyone. I am Takeshi Yamaguchi. I’m based in Tokyo, Japan. I was originally born in Kyushu, a rural area. I didn’t plan initially to work in the film industry. After graduating from high school, I actually worked in the Japanese Air Force. I quit this job after a few years because I decided to chase my dream, which was to become an artist. At that time, I really hoped to live my life drawing paintings. However, I soon recognized that this was not so easy to achieve. So about a year later, I happened to check a job magazine to seek a part-time job – and that’s when I started in the film industry.

By coincidence, I started working in the film industry as a VE, and I had the opportunity to work with a crew from Tokyo. After realizing that their skills and talents were incomparable to mine at that time, I decided to make the move to Tokyo and learn more about the film industry. 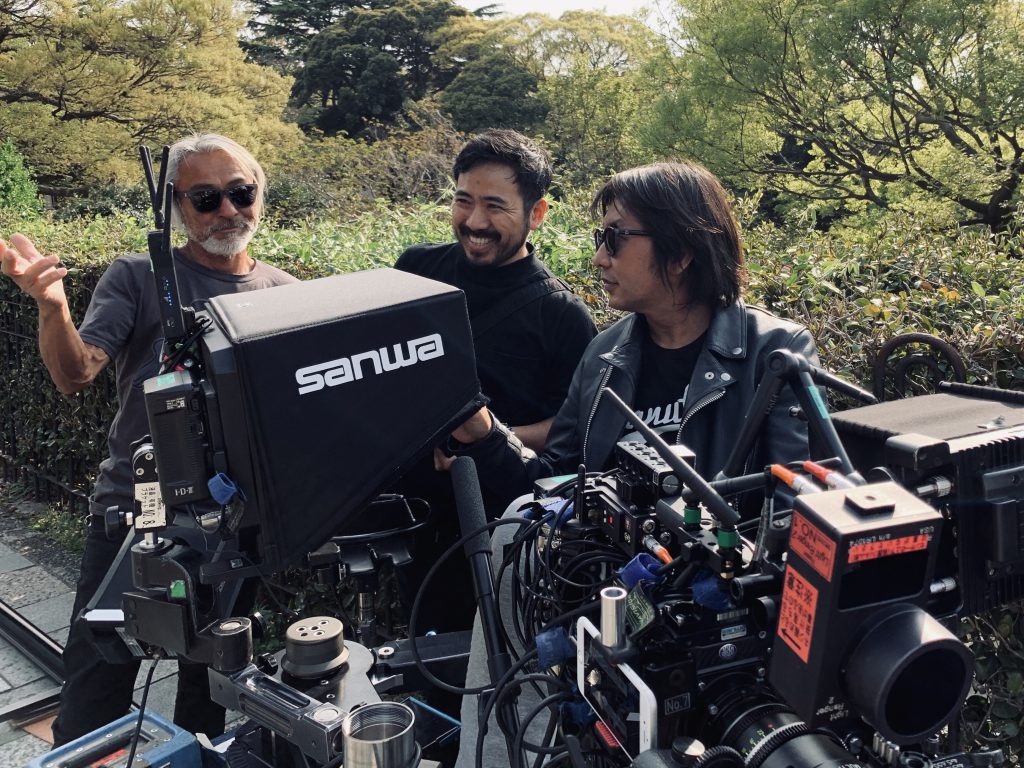 Takeshi in discussion with others on set

While working in Tokyo, I first developed an interest in becoming a cinematographer. I felt that between an artist and a cinematographer, there were a lot of similarities, as they both focus on creating a visual product in the end. During my training session, I noticed, though, that I actually preferred supporting others on set and interacting with colors. That’s when I finally chose to become a DIT.

During my work as a DIT, I soon realized that it would be better to have my own company. So in 2008, I established my own company, GLADSAD Co. LTD. By now, I have a total of 8 employees working in my company. They work as DITs, Colorists, QTake Operators, and Data Managers.

Although in Japan it is common for one DIT to do all the work – including QTake and data management – my company is full of talented individuals with specialties, so everyone has their own roles. 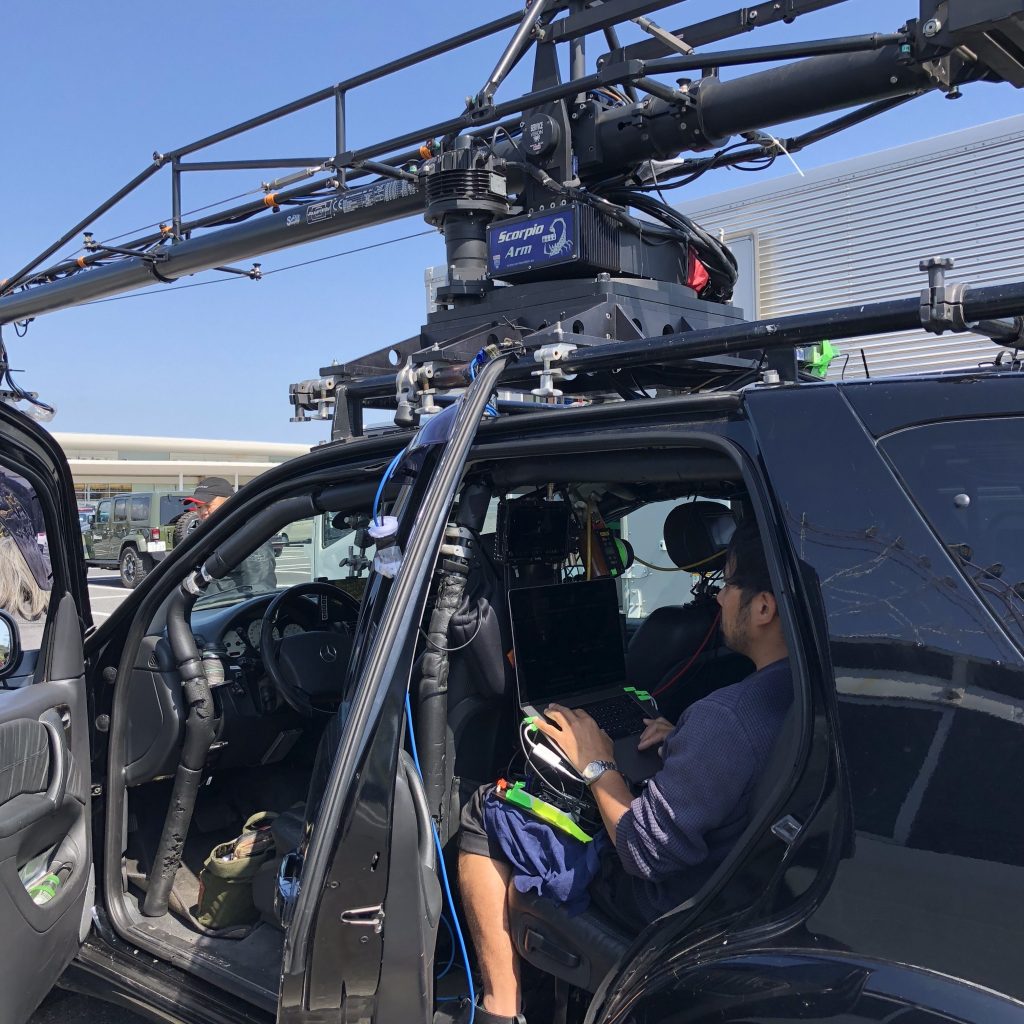 Checking footage from within the car

Can you please share some details about your work? E.g., what kind of projects are you usually working on?

As a DIT and Colorist, I basically work for commercials and films. I mainly use Livegrade Pro, Resolve Live, QTake, and DaVinci Resolve to do on-set grading.

During my work, the communication aspect is very important to me. I always try to communicate actively with others. For example, I often give advice to the lighting staff at the scene based on the feedback I get from the DP in order to make sure we create the right image from the start.

Even though for Japanese DITs, it is not so common to do this, I always proactively go around to see every scene and communicate with the DP, gaffer, grip, and the rest of the staff to produce the best images. 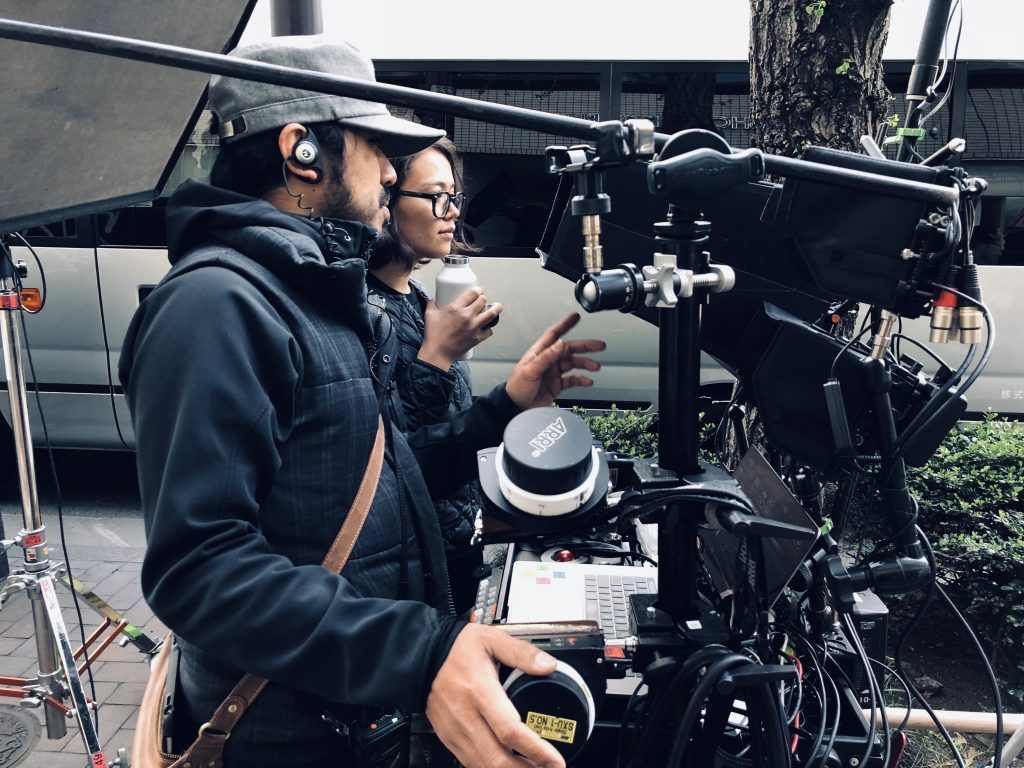 Getting the right image…

We know that everyone’s setup varies, so we are particularly interested in your DIT setup: How would you describe your personal overall setup?

I have three types of carts: A main, a second, and a compact cart. My choice which one of them to use depends on the situation. When I work in the studio, I use my main cart with my second cart primarily. When I work outside, on places like a beach, in a forest, or in a car, I bring my compact cart because oftentimes, there is limited space for a DIT cart to be placed. 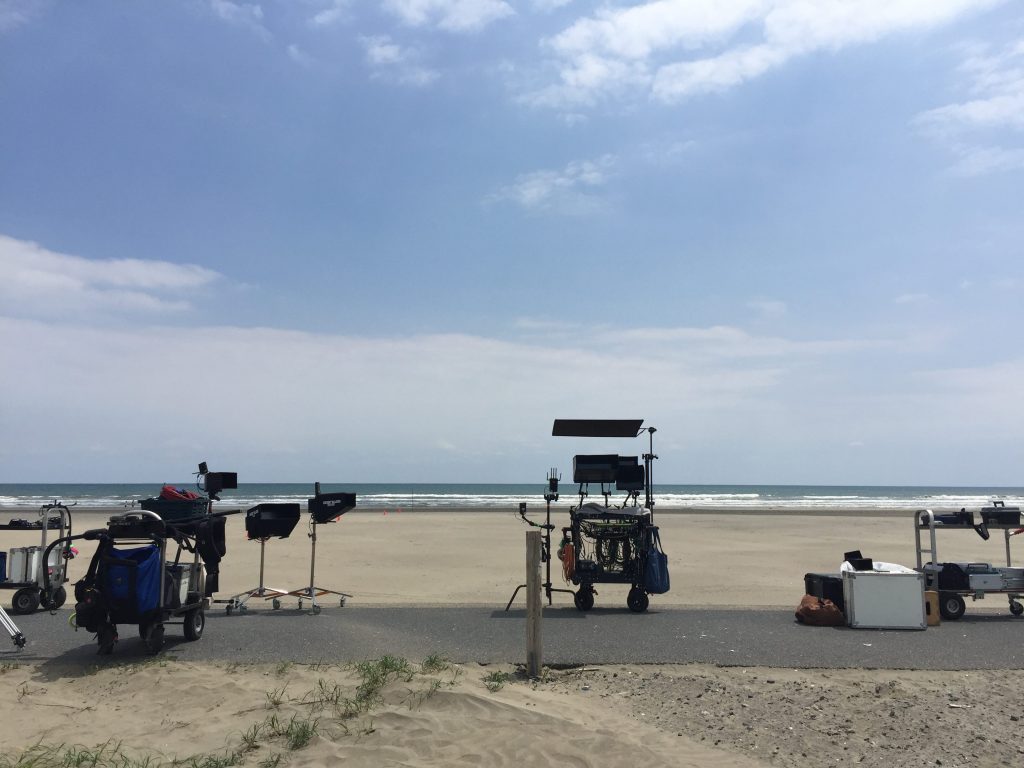 A compact cart for outside….

Please tell us a bit more about the components of your setup:

Are your carts movable? Do they have wheels?

I use Ranger carts from INOVATIV. They can easily go through elevators and narrow places.

They have four trolley wheels, and they have stoppers on each wheel to make them more stable. These stoppers work well even if it’s a place with bad footing, such as in a forest or on a slope.

How many monitors do your carts have?

Basically, depending on the situation, I attach one or two monitors to them. The monitors are lifted up with an Infinity Arm, so I can keep the carts compact when they are closed.

What kind of video gear and computer gear is included in your setup?

On my cart, I usually have a MacBook, an AJA KUMO router, an Atomos SHOGUN, QTake, a Decimator DMON, and a DC/-AC inverter. With QTake and the DMON, I can take care of four cameras at the same time. For QTake, it’s sometimes hard to take the heat, so I protect it with a big bag of ice in the summer. 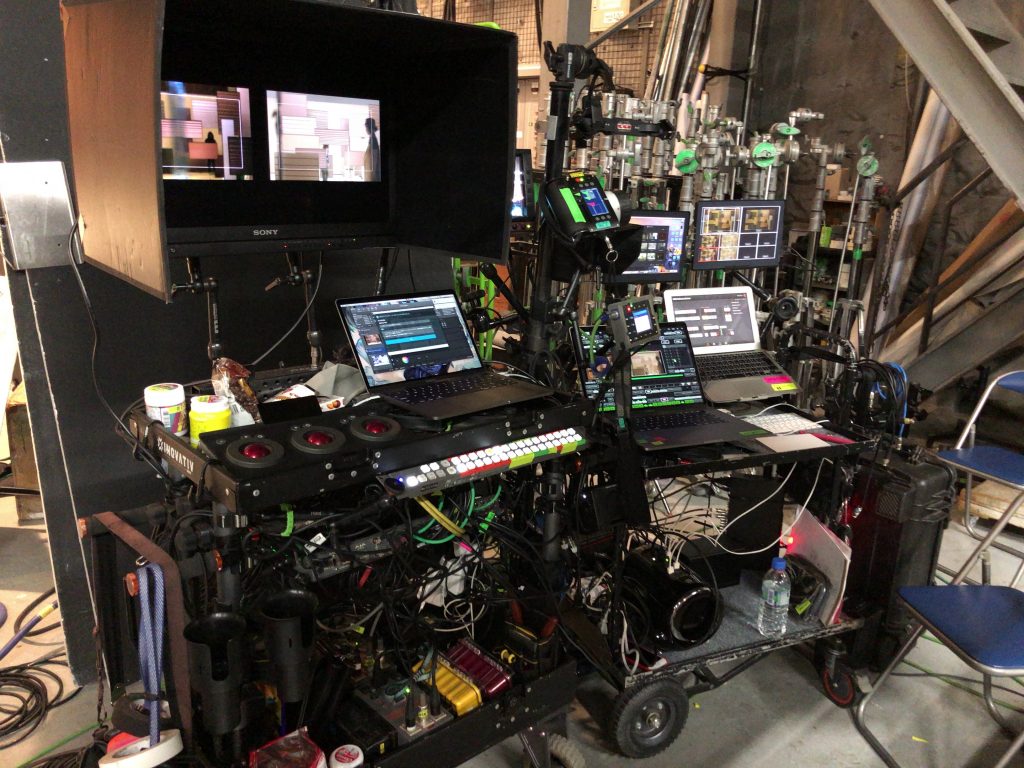 … and two very powerful carts for the studio.

How do you handle power supply on set?

I use a DC/-AC inverter, which can switch devices from DC to AC or AC to DC. Even if there is no AC around me, it is possible to drive the software and hardware all day with a battery.

What are the accessories and special features of your cart?

I always keep a jar of chocolate with me because I use a lot of energy while doing DIT work all day long. Also, carrying some chocolate seems to increase my chance to talk with the other staff because they tend to pick up some chocolate as they come to talk to me. I love the moment when everyone comes to pick up my chocolate, and we all have a conversation! 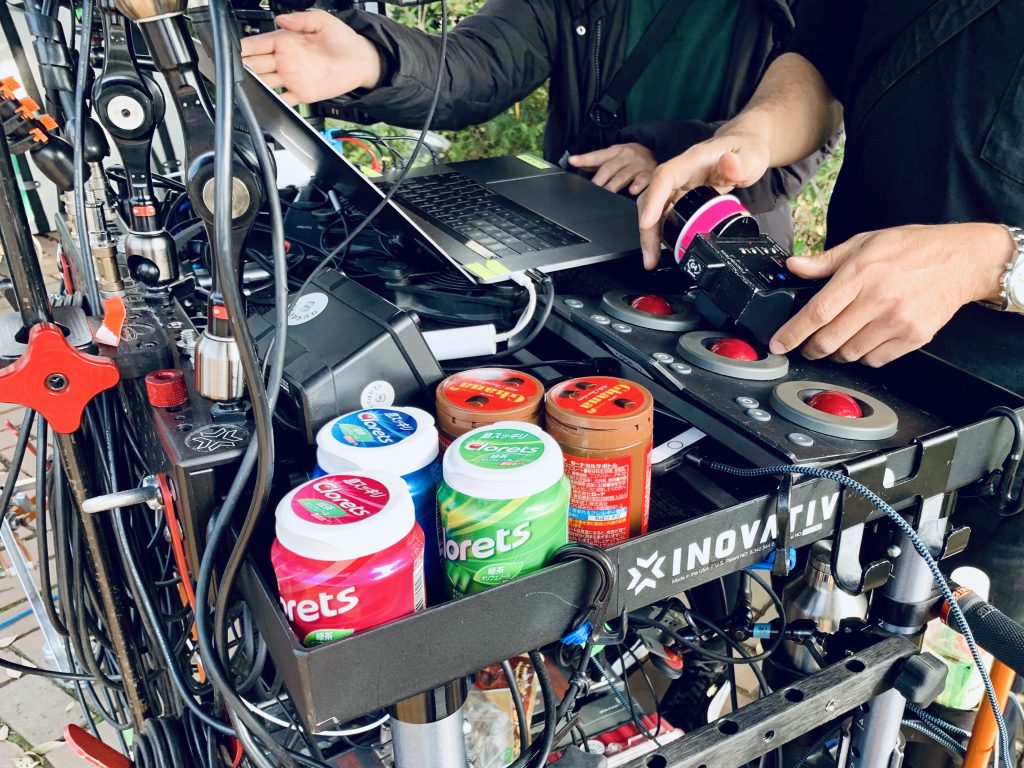 Sweets and treats at the DIT cart

What is your personal favorite component of your setup?

By connecting a Teradek Bolt 10K, I am always able to show Log images and LUT images on other monitors, especially on the DP’s monitor. This way, the DP doesn’t need to leave the camera to check the monitors, and he can watch the image immediately. I can do this because I always keep QTake on my DIT cart – this means that even if there is another operator, all the images go through to my cart.

Also, I always carry a Flashmate L-308X from Sekonic with me. It’s very convenient because I often go around to see every scene, and the small size makes it very easy to carry with me. This is a necessary item when I have discussions with the DP and lighting staff. 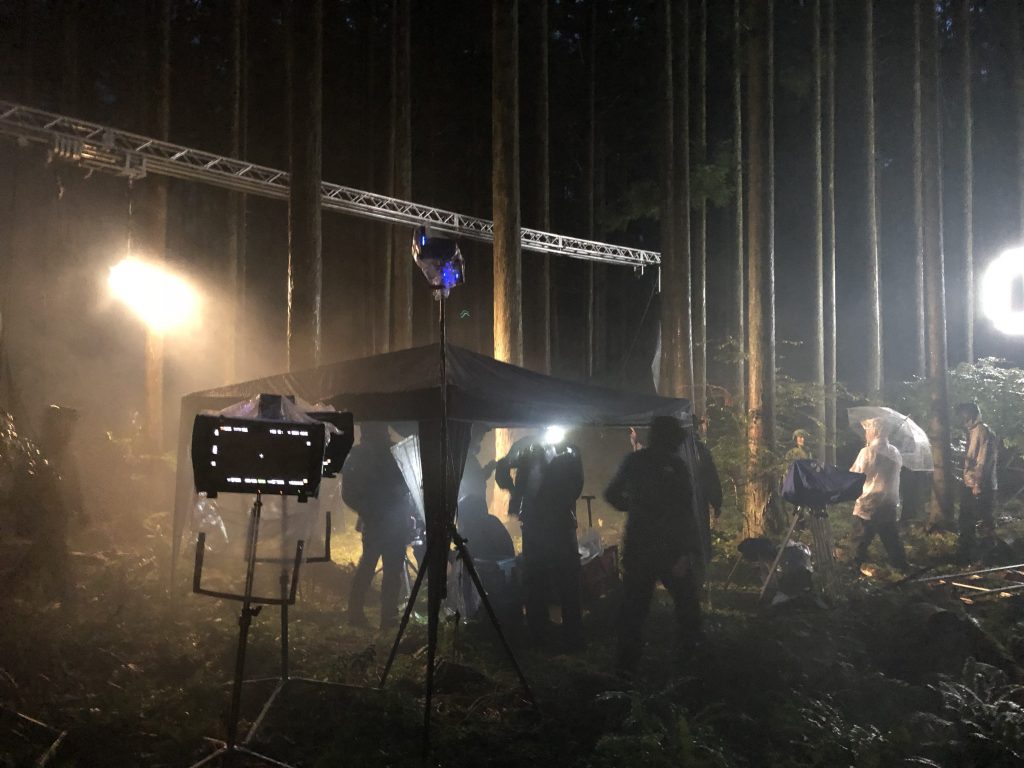 Night shoot in the forest

What has been the latest addition to your setup?

I don’t have any latest addition at the moment. However, I am planning to get a ScreenPort SDI from in2core, which was just announced at NAB 2019.

As I mentioned, I usually don’t stay in front of my cart on the scene. I would leave my cart and check the lighting with my own eyes. Therefore the ScreenPort would be great for me, as I can work on the scene while watching on a portable monitor. 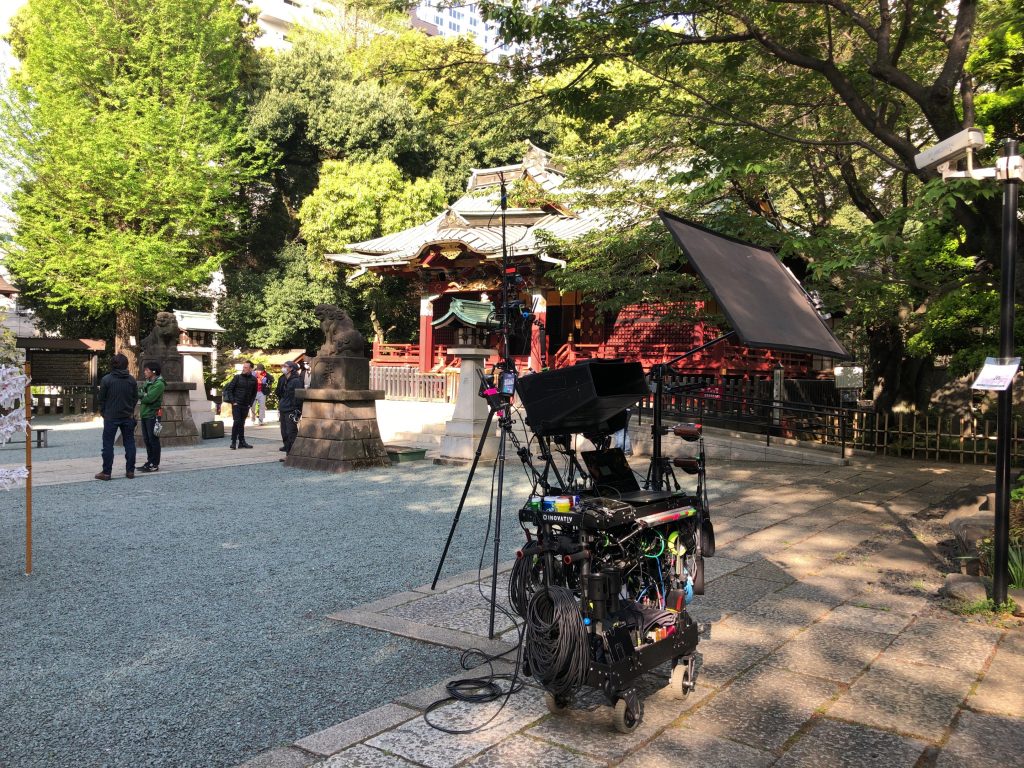 Shooting outside at a scenic temple

Are there any notable stories that have happened with or to your setup while on set which you’d like to share with us?

There was a time when I had to control the live images from eight ARRI Amira cameras at the same time. In the beginning, I was thinking of doing this by using eight LUT boxes. However, I felt like there must be a more fun way to do this, and a new idea crossed my mind. The idea was to use in-camera grading and control the looks with PocketControl. We didn’t have enough time for offline editing, so we controlled the eight cameras remotely. The eight cameras recorded all the look metadata with the media. DaVinci then opened everything already graded, and that worked very well, just with PocketControl. This solution saved us a lot of time and costs.

My idea worked out successfully, and that moment became an unforgettable experience in my DIT life!

Many thanks to Takeshi for sharing these insights into his setup with us! 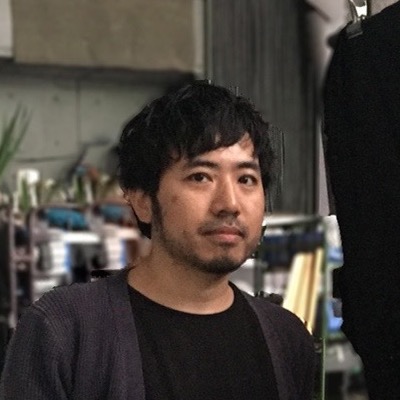 Takeshi Yamaguchi mainly works as DIT and colorist. Based in Tokyo, Japan, he mainly works on feature films and commercials with his company GLADSAD Co. Ltd.