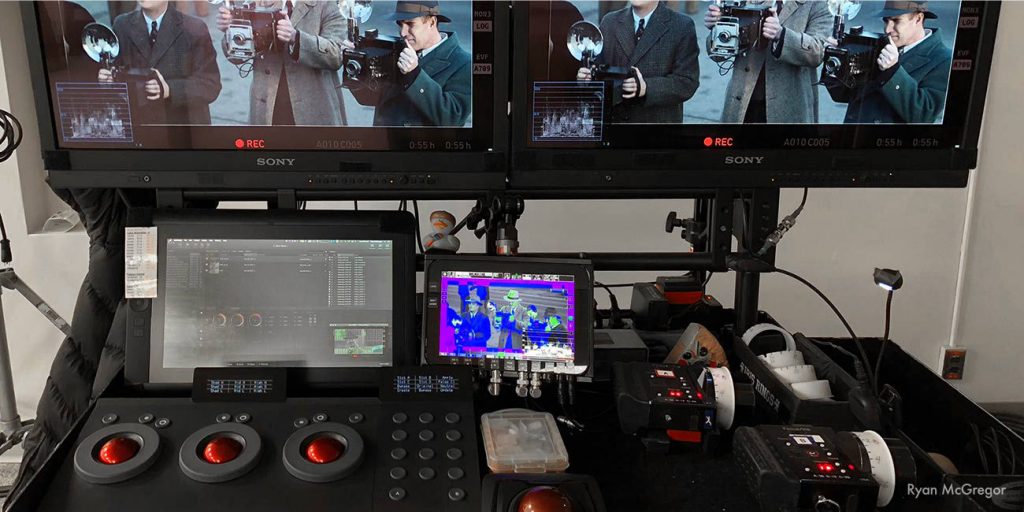 Digital cinematography enables (and sometimes even requires) post-production related activities to be already taking place on the film set. If you think about data backup of camera footage, dealing with “log” signals, or even transcoding dailies on set: It has become quite common to do all these things on set, even though, they were formerly handled in post-production locations.

In this article, we want to focus on such an activity: The interactive work with the digital look of camera images on set, also known as “live grading”. This activity is becoming increasingly popular for productions to do on set,  while some don’t do it at all. So why would a production choose to do live grading? In the following, we will point out four immediate benefits and show how they can affect your next project.

Preparing for Production and the Basis for Live Grading

Before we get to the benefits of live grading, let’s first have a look at what the term “live grading” actually describes:

In pre-production, a lot of time and work is spent preparing “the look” of the production by, for example, collecting reference material and creating extensive mood boards. The outcome of this preparation is used as a starting point and guideline for the thousands of little decisions made during the actual production.

One part of the outcome relevant for the camera department is the camera look, also referred to as the show LUT. This show LUT is a digital look transform that includes creative color grading adjustments such as specific saturation or contrast changes. This LUT (or maybe a hand full of different ones) is created by a colorist and/or directly by the DP. Besides other elements influencing the look (such as set, costume, lighting, etc.), show LUTs are very often created and used as a static starting point for camera monitoring on set. The show LUT is only used to monitor the live signal – the camera will still always record a neutral or RAW image to have maximum quality and flexibility in post-production.

With “live grading”, we describe the modification and interactive manipulation of the show LUT during shooting. In the following sections, we will show why the interactive work with the look can be very useful and how it can have a big influence on the quality of the production workflow – on set as well as in post-production later on:

1. Previewing the Scene “Through the Digital Look“

These four factors heavily influence each other, so a bit of interactive work is often needed to “get it right“.

A prepared digital look is usually applied to the camera signal so that the DP’s (and the DIT’s) monitor shows the camera signal through the show LUT. This makes it easier to judge how changes in, for example, lighting or exposure influence the contrast of the resulting image under a chosen LUT.

Just like you sometimes decide to change a lens for a certain reason, the show LUT may not work properly in the given conditions. Being able to tweak the look (e.g., by reducing the contrast or making the appearance a bit warmer) helps the DP achieve and stay within the creative intent.

2. Developing a Look During Shooting

In some cases, the show LUT is not prepared before production but is developed during the first few shooting days under the guidance and input of the DP’s creative intent. Being able to “live grade” on set allows creating a look based on the current scene. Thus, it’s possible to develop a look from scratch (e.g, based on the manufacturer-provided standard look transforms for the chosen camera system) or tweak a prepared look to better suit the current situation.

It is quite common that different camera and lens models are used within one production. While there are good reasons for that, changing camera systems and lens models influences an image’s look, which is a downside.

To maintain a consistent look for the entire production, compensating for these differences becomes necessary. The easiest way to do so is to adjust the digital look.

However, changing equipment is not the only aspect altering the look in unintended ways. The scene context (e.g., different lighting, framing, or just changing the focal length) is also an influential factor. Consistency can already be a challenge with one camera, but it gets even more apparent when using multiple, potentially different cameras, or working with multiple units.

4. Using Look Metadata for Dailies Creation and in Post Production

A consistent look that has been maintained throughout the entire shoot is the best base for creating dailies for viewing and proxy files for editing. When shots get edited, each “jump” in the look appearance from one clip to another makes it harder for the editor to make the scene appear fluent.

In practice, the DIT saves look metadata for each of the look manipulations and adjustments made during the shooting day. This look metadata is then matched to the recorded clips in the dailies creation software. This way, the dailies and proxies will look exactly like the live signal on the HD-SDI monitor on set. Watching the proxy files with the applied look in editorial ensures that the DP’s creative intent is considered in post-production.

In addition to the dailies and proxies use case, look metadata also benefits post-production activities like VFX and final color correction. For example, the VFX department can use the look metadata for simulating the look of the DP’s monitor in the facility. Being able to view both the camera source material and the visual effects through that look improves the accuracy of visual effects matching the production’s overall look. For a colorist, the look metadata can provide a starting point for the final color correction and a useful reference for understanding the original intent on set. All this helps to improve the overall quality and consistency in post-production.

Different Workflows for the DIT

The activity of adjusting the digital look on set can take various forms. If a DP wishes to interact with the DIT in terms of live grading, the activity will play a more prominent role close to the DP’s or DIT’s monitors. Even though DPs usually don’t operate color controls, they do give creative input. The DIT, on the other hand, runs and operates the live grading system while also providing reference frames at the DIT cart for maintaining consistency.

Sometimes live grading is not requested by the DP and is not part of the interaction between DP and DIT. Nonetheless, maintaining a small live grading setup still holds value for the DIT – especially if dailies and proxies should already be created on set. Such a smaller setup allows the DIT to adjust a prepared look in response to the scene context during shooting. When the camera card arrives, the look metadata is already prepared so that looks can be directly applied to the camera’s source footage. Thus, dailies and proxies can be created with a consistent look immediately after shooting and without further adjustments.

If you’re concerned about the image’s look, live grading is a way to improve the production quality – by supporting the DP’s work with the camera, enabling the creation of graded dailies and proxies, and ensuring a consistent look in the entire post-production.

Loading a LUT or look into the camera constitutes the first step of working with looks on set. However, being able to adjust looks in response to a scene’s specific needs or setup affects the quality of an entire production on a whole different level.

Pomfort offers an advanced solution for live grading called “Livegrade Pro“. You can find all information about it here: