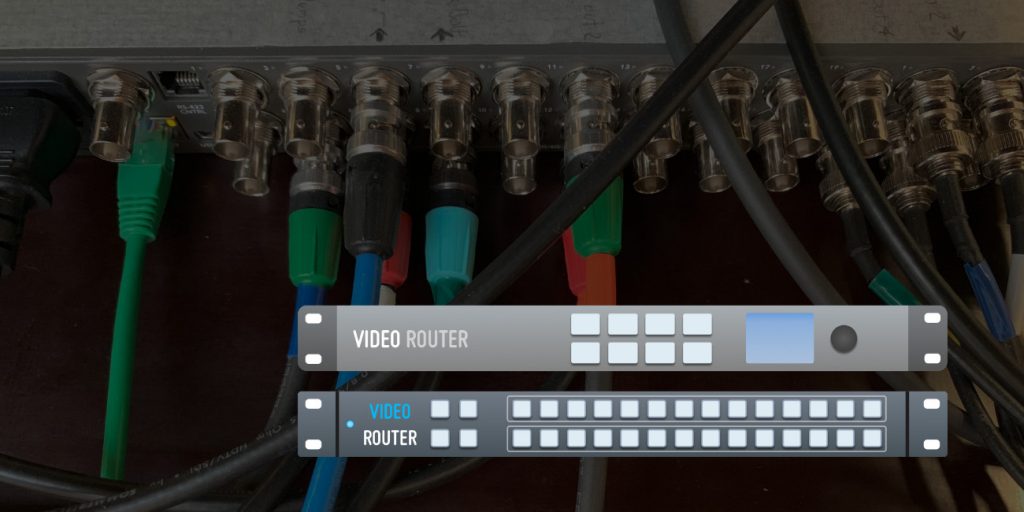 EDIT: This article has been updated with references to Livegrade Studio as well as a link to a follow-up article.

While the integration of a video router on the DIT cart enables setups that would be hard to handle otherwise (e.g. switching between 5 camera inputs on one monitor), it also introduces a new level of complexity. All devices can now be connected to each other – and that needs to be managed by the DIT.

When you’re working with Livegrade Pro or Livegrade Studio, you can reduce this complexity by setting up automatic routing changes from within the software. In the following we will discuss three typical setups in which the Livegrade applications help reduce complexity, and discuss how these setups can simplify and speed up the work at the DIT cart.

The Livegrade applications allow to independently control the look of multiple cameras. To do that the application uses the concept of camera “slots”. For each slot you can manage devices, metadata, and looks individually, thus making the slots comparable to the independent tabs of a web browser.

As a general rule, when adjusting the look in one slot, it is necessary to also view the image of that slot’s camera on a monitor. This means that if you change slots to work on a different look, you would also have to manually change the camera image you see on the monitor. If you work with multiple slots and multiple cameras, this can quickly become tedious.

By using a video router and setting up the right workflow, you can automate this manual process. As a result, the image on the monitor would automatically follow the selected slot in the application.

With this setup, the moment you change slots, the routing configuration will be triggered. So if you change let’s say from slot A to slot B in the software, camera B’s signal will be automatically routed to your monitor. If you change back to slot A, you will see camera A’s image again.This means that no more manual switching has to be done. The image on the monitor always automatically follows the selected slot in the application.

There are two steps involved when configuring such a setup: 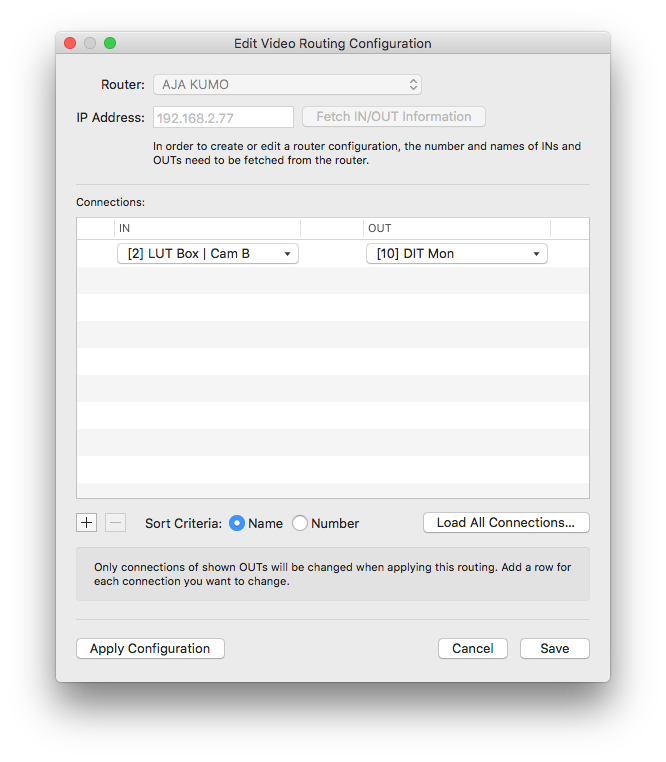 This is the router configuration that routes the signal of camera B to the monitor. You create such a setup for each camera signal.

2. Adding the automation for slot changes

Choose the routing configuration you previously defined as the action for the event “Switch to Slot..”. Whenever you switch to a certain slot, the corresponding router configuration will be triggered.

When you are using a capture device with Livegrade Pro or Livegrade Studio, the software not only can create frame grabs and record clips of the incoming video signal. It can also extract camera metadata from the live signal. With the DIT software’s video routing configurations and a bit of extra automation, you can use one capture device to subsequently monitor image and metadata from multiple cameras within the software.

To do this, you create very similar video routing configurations as in setup 1. The difference is that this time you route the signal to the capture device instead of the monitor.

The setup of the automation is the same as in setup 1. Again, you choose the new router configuration as the action for the event “Switch to Slot..”.

You can configure this in the automation manager by using the “Move capture device to current slot” action.

Configure automation for moving a capture device on slot change

Now whenever you change a slot, you will get live image and live metadata (if available) of the current slot’s camera – although you only configured one capture device.

With that in mind, you can imagine a broad range of configuration changes, that may not have to do with Livegrade Pro per se, but that you may want to trigger also from the application – as this is the application that’s open on your cart anyways.

You can assign keyboard shortcuts to video router configurations as follows:

Every video router configuration shows up in the main menu (under “Video Routing Configurations” in the Livegrade Pro menu). This means you can also trigger these configurations from the menu.

You can set a new, custom keyboard shortcut by clicking “Map Keys”, selecting the video routing configuration, and pressing the desired key combination.

Now your custom routing changes can be applied with the set keyboard shortcut at any time from within the application.

In this article we have shown three setups in Livegrade Pro and Livegrade Studio that allow for either automatic or quick manual access to video routing configurations from within the software.

The Livegrade applications integrate these configurations in different ways, so that you can tailor the software to the needs of your specific cart and project.

For a second part of this article, please see the blog article Video Routing in Livegrade Studio – Use Cases and Integration Features.

For a hands-on look at the software, there is a 14-days trial download available on our website: