With the majority of live events canceled throughout last year, brands had to get creative and come up with alternative ways to engage audiences and promote their products. And they did: From parties and concerts to fashion shows and product launches – things went virtual! One could truly say it’s been the year of livestreams.

In this interview, Shanghai-based colorist Xu Shangyi grants us exclusive insights into the production of commercial livestream events and his live grading workflow. Managing a show’s look while it’s getting broadcasted creates a demanding production environment with unique challenges. Keep reading to learn how Xu Shangyi used Livegrade Pro to realize livestream projects for big brands like TikTok and Corona (and by that, we mean the beer).

First of all, thank you for sharing some insights into your productions with Pomfort. Can you tell us a bit about yourself and your work first?

Hi Pomfort, thanks for reaching out to me. My Name is Xu Shangyi. I am a colorist, and I live in Shanghai.

I have been working in color grading since 2015, mainly in the post-production house.

But from 2020 onwards, the work changed. We slowly started to work on live color grading for Electronic Field Production (EFP) livestream projects, and the workplace moved from the post room to the set.

What kind of livestream projects are you usually working on?

During the Covid-19 pandemic, many offline marketing activities came to a halt. Live Internet broadcasting on mobile phones, however, is becoming increasingly popular for brands and their marketing approaches.

For example, cosmetic companies or luxury product brands may invite famous artists or celebrities to collaborate on online product promotions. These promotion activities often take the form of livestreaming events, which get broadcasted to mobile phones and thus allow for live interaction.

Such livestreams come with specific requirements and challenges: For example, the artist team will require the celebrity’s skin tone and dress color to match the post-production standards of previously shot commercials. At the same time, productions involving cosmetics and luxury goods such as lip gloss, makeup foundation, or luxury bags will have high demands for reproducing the products’ colors on phone screens as accurately as possible.

So, in contrast to the previous EFP (Electronic Field Production) live projects, live color grading was added into the processing pipeline. There are different types and formats of livestreams, such as product launches, variety games, concerts, parties, and so on.

You recently worked on a livestream production, called “Corona Deng Lun’s Resort”, on which you used Livegrade Pro. Can you tell us a bit about this project? How did the team come together and what role did you play?

In October 2020, we were invited to participate in the live production of “Corona Deng Lun’s Resort”.

As we were a post-production and color grading company before 2020, we had accumulated a large pool of excellent producers, 4A advertising agencies, and other resources. So when Corona Beer invited artist “Deng Lun” to host an online live broadcast in Xiaomesha, Shenzhen, it was natural for us to come together as we had worked together before.

Apart from being responsible for color grading the PGM signal, I also had to ensure the consistency of color and quality of the images captured by the multi-camera  setup on set.

Which and how many cameras were used on this project?

For this production, 6 C-2580 channel cameras were used.

Why did you decide to use Livegrade Pro? Were there specific requirements for the use of the application?

We have also tried other color grading software (e.g., DaVinci Resolve) for live color grading. However, we noticed when we need to produce a live project at 50 frames per second, after about 2 hours or more, the computer’s heat becomes very noticeable, followed by frame leaks, lagging, and progressively out-of-sync sound and video.

Livegrade Pro can be used with LUT boxes, like the FSI BoxIO, for color grading. It does not particularly take up computer resources. The most important thing is that even if the computer crashes and other situations occur, it will not cause the output screen to be blacked out or disconnected, providing a guarantee for safe broadcasting.

Can you please briefly describe your on-set workflow for livestream productions? For which aspects of your work did you use Livegrade Pro?

First of all, it’s important to ensure that the live audience in the studio can enjoy the lighting atmosphere with their eyes. At the same time, though, I also need to keep the on-site lighting conditions within a reasonable range for the live broadcast and meet real-time color grading needs.

Secondly, the live color grading is based on the PGM signal from the broadcasting station, so it is essential to ensure consistent color from each camera when shooting multiple locations. We will commission the broadcast camera in the RCP system. For film cameras, we usually call up the in-camera parameters for adjustment. Also, for example, in live events where Steadicams are mounted with Sony PXW-X580 cameras, their signal is usually returned to the broadcasting station via a video transmission. Sometimes, we also grade the video signal separately to match the rest of the cameras.

Then, once the color matching of all the cameras on set has been harmonized, we use a signal generator (source) to feed a standard test signal to the broadcasting station. The video is also streamed to the mobile phone, so we check the mobile phone image using the scope. As it is a livestream cast, the signal will cause some problems, like, compression, color mismatch, etc. This is the time to add an “adjustment node” in Livegrade, using the “LGG” (Lift/Gamma/Gain) and “Curves” tools to correct the brightness and color of the test signal.

Finally, when all the above preparations are completed, we can start the live color grading work, such as retouching skin tones, restoring the product’s natural color, enhancing the lighting, or creating a stylized look.

How was your overall experience of using Livegrade Pro? Were there any features that you used frequently or liked in particular?

As an experienced colorist, Livegrade is very simple and easy to use. Since version 5.3, Livegrade Pro includes the “LGG” color grading module, which allows us to use the familiar Lift, Gamma, and Gain grading tools to quickly create looks for livestreaming – a nice upgrade!

Were there any particularly challenging situations or setups on this project?

For some of the shows we had already created different color presets for the different songs and dances during the rehearsals. For example, it was very tedious to switch from A to B, then back to A, and then to C. We named the color presets directly according to the order of the programs, for example, program 1-1, 1-2, 1-3; program 2-1, 2-2, 2-3, and so on. Even if a program uses the same color preset repeatedly, we still keep the name separately based on the order of the show.

How is working on livestreams different from working on other film productions?

The looks of a live broadcast (e.g., a singing and dancing show) are very different from looks used in film production. Key to a successful livestreaming broadcast is to ensure the continuity of the picture, no interruptions, and to meet the broadcast safe requirement.

For example, when a song and dance program is followed by a talk format, we need to switch the looks. It’s common practice to switch the pre-saved color presets when commercials or shots of the hosts are shown. However, things get more tricky when the director tells you that there are no excessive commercials or bumper videos that can play between these two programs. We have to output two identical PGM signals from the broadcast station simultaneously, add different color presets to these two signals, and use the secondary broadcast station to switch between them to achieve the video dissolve transition effect.

Another example is a rock song with a lyrical and slow tempo that requires a warm color look during the central theme. During the chorus, the music changes to an intense and exuberant style, and a cool look preset is needed. Because it’s a coherent performance, we still can’t switch between the live color presets directly, so this is where the dissolve transition function for switching between color styles comes in handy.

When you think back to “The Sea is Alive and Wonderful”, what is your most memorable experience? What did you enjoy the most?

When recalling the live color grading of “The Sea is Alive and Wonderful” show, the client wanted to use the LED screens and lighting to show the deep blue of the ocean depths. Initially, according to the design, the LED display was for the underwater section, using computer lights on top of the stage to mimic the sunlight spilling over the ocean surface.

However, when the light ratio is so high, the camera will not capture the atmosphere that you can usually see with the naked eye. This forced us to reduce the output brightness of the LED screen, however, the color performance of the screen is also reduced at lower screen brightness.

Secondly, there is no “cyan” in the color gamut of the computer lights on the stage, and the client wanted the final broadcast image to be cyan.

Then we managed to use Livegrade Pro’s curve tool to modify the light color, which is much quicker and cheaper than changing a large screen and changing the stage computer lights.

Big “Thank You” to Xu Shangyi for granting us these exciting insights into the production of livestreams! 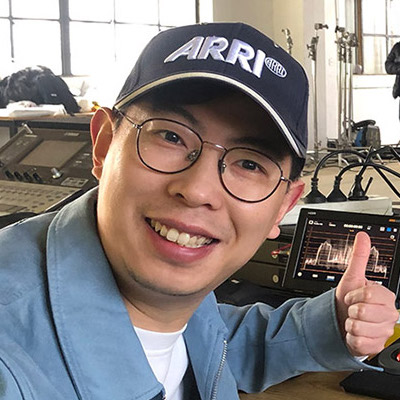 Xu Shangyi is a Shanghai-based colorist. In close collaboration with the camera crew, he realizes filming and color grading projects for renowned cosmetics, luxury goods, and clothing brands. Given the promotional nature of these productions, his clients place great importance on an accurate portrayal of their products’ colors. Hence, it’s Xu Shangyi’s job to ensure everything looks the way it’s supposed to!