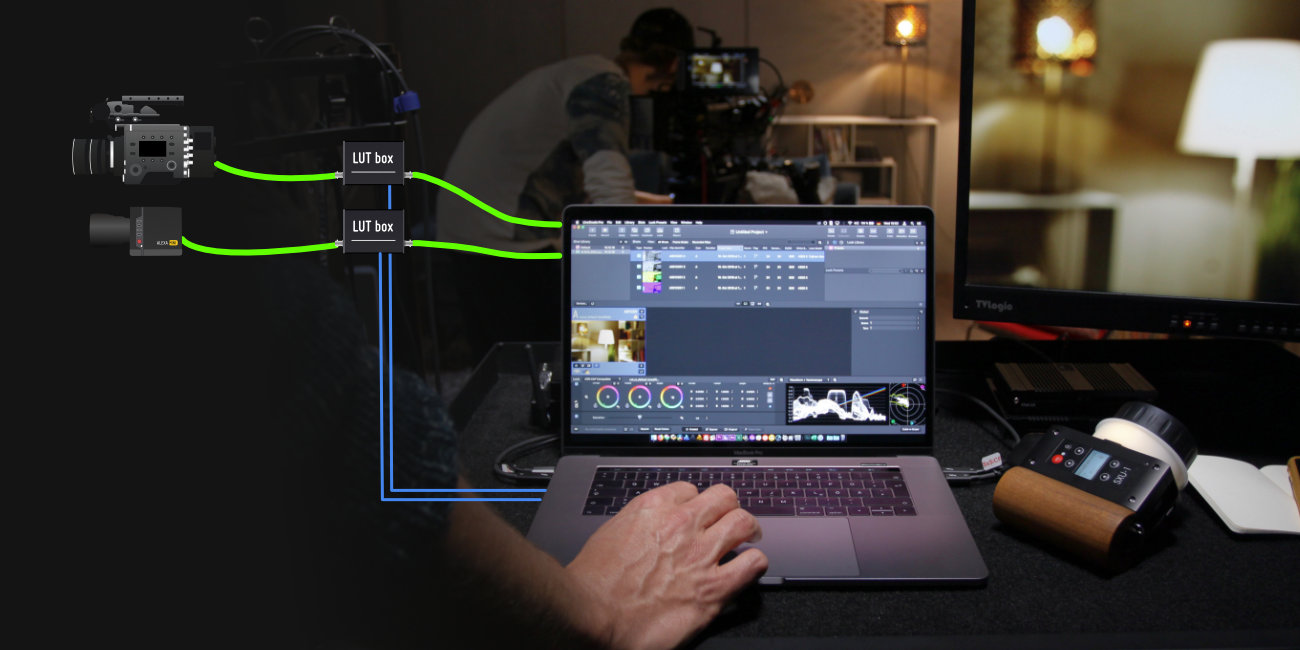 Introduction to Hardware options and Workflows For Live Grading

In case you are thinking about starting live grading as part of your on-set service, and you are not sure about the necessary hardware that is needed around Livegrade – this might be your article. We will lay out typical hardware configurations from a very simple setup with just one camera and a notebook up to a full DIT cart with multiple monitors, LUT boxes, and video routing.

As so often choosing the right gear is all about getting the job done with the least amount of equipment – but at the same time being prepared for unexpected moments. This article aims to illustrate what you can do with Livegrade Pro (and Livegrade Studio), and what options you have for your hardware shopping list.

Each setup suits a specific scenario on set. This is meant to give you examples for what can be achieved with our DIT software in different hardware contexts. These different setups not only come with quite different price tags, but also with different requirements for space and power consumption.

So you might choose a smaller setup not only for its lower price, but also for reduced complexity or better mobile application. For each setup we illustrate the actual work and service that can be offered with it – as well as the capabilities and limitations for that specific hardware selection. That should give you a good idea how these configurations differ in their applicability for your specific production.

How Does Pomfort Livegrade Work in General?

The basic idea is that Livegrade[1] controls devices that process live video images in order to apply a certain look to the live image.

Generally, there are three (plus one[2]) positions where the video processing can happen:

In addition to the location of the processing there are many more options in Livegrade, such as number of cameras and devices, connection to the devices, capabilities to store visual references, and for automated setup.

In the following sections we will cover all of these aspects and try to give concrete examples for their applicability in real world productions.

1. Livegrade Pro on a Notebook for In-Camera Grading

In case you are working with a camera that allows for in-camera grading via Ethernet or Wifi, the most simple setup starts with a notebook running Livegrade Pro – and a Wifi connection to the camera.

Cameras with that capability are currently the Alexa Mini, Alexa Mini LF and the Amira, any DSMC2 camera by RED supporting log3G10, the Panavision DXL2 camera, and Panasonic Varicam cameras (with the Sony VENICE to be added soon).

Controlling multiple cameras from Livegrade is possible, although the Wifi setup is usually different. As for a multi camera Wifi setup you have to configure a Wifi hotspot where all cameras and the notebook join instead of a single setup where the Wifi is generated from the camera. 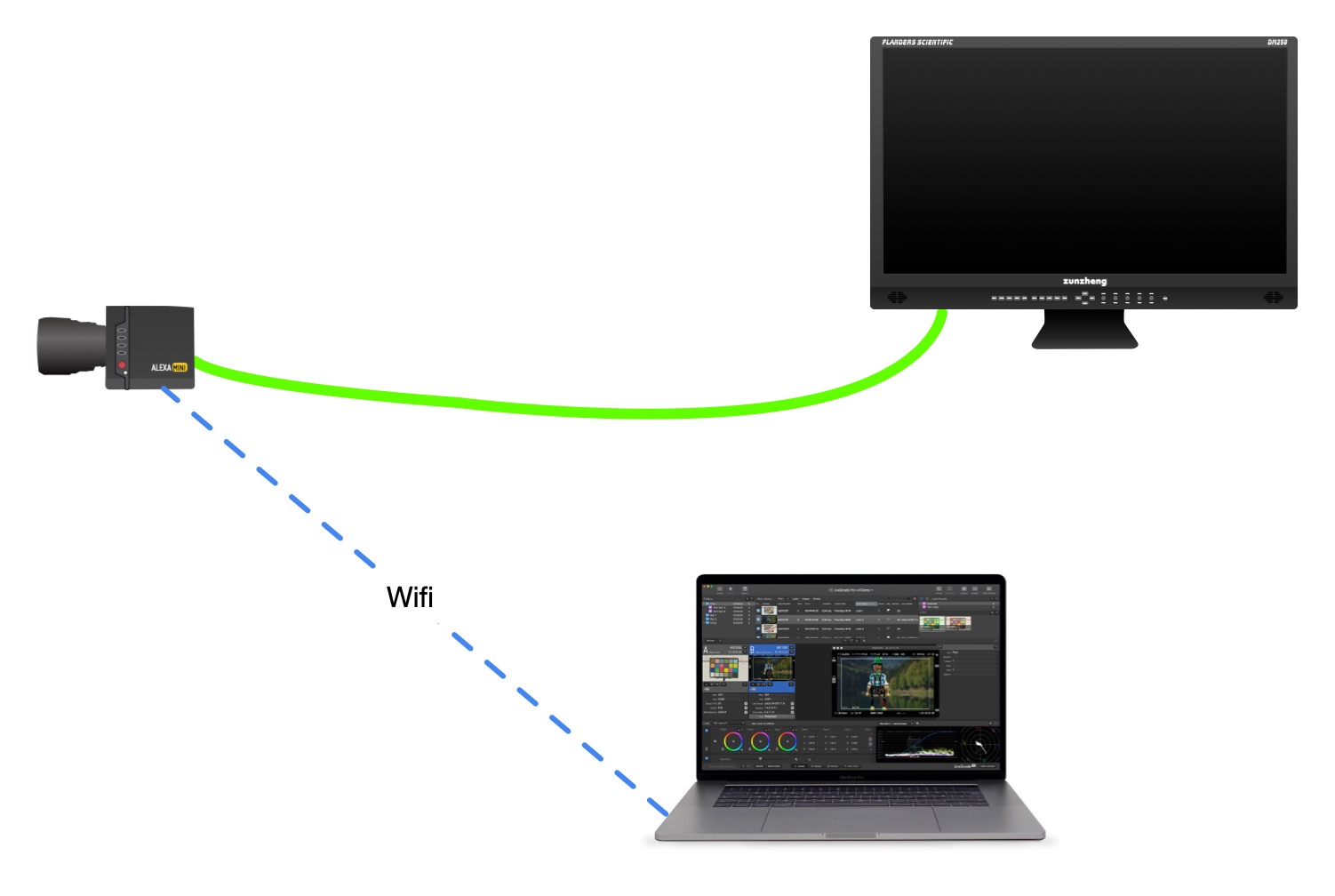 Livegrade Pro on a Notebook for In-Camera Grading

The remote control connection to the camera can be used to switch looks (e.g. to see the scene through different looks) but also to adjust a given look (e.g. to reduce contrast for a given lighting).

One of the unique benefits of in-camera grading is that the look metadata can be embedded into the camera source files on recording. Even if the clips are recorded “log” or in RAW, the current look travels as metadata with the media and can be applied at any time later.

Unfortunately not all cameras support in-camera grading, so this doesn’t work for every production. Also if you feel the need for several outputs of the camera (e.g. a signal with look for the director and a switchable output for the DIT), that’s also not possible with every camera, or you need at least two video cables coming off the camera.

Livegrade can control the internal processing from Flanders Scientific (FSI) and Canon monitors. This means for small setups with just a camera and a monitor, you can apply a look to the log output of the camera directly in the monitor. The monitor is usually connected to Livegrade via Ethernet. 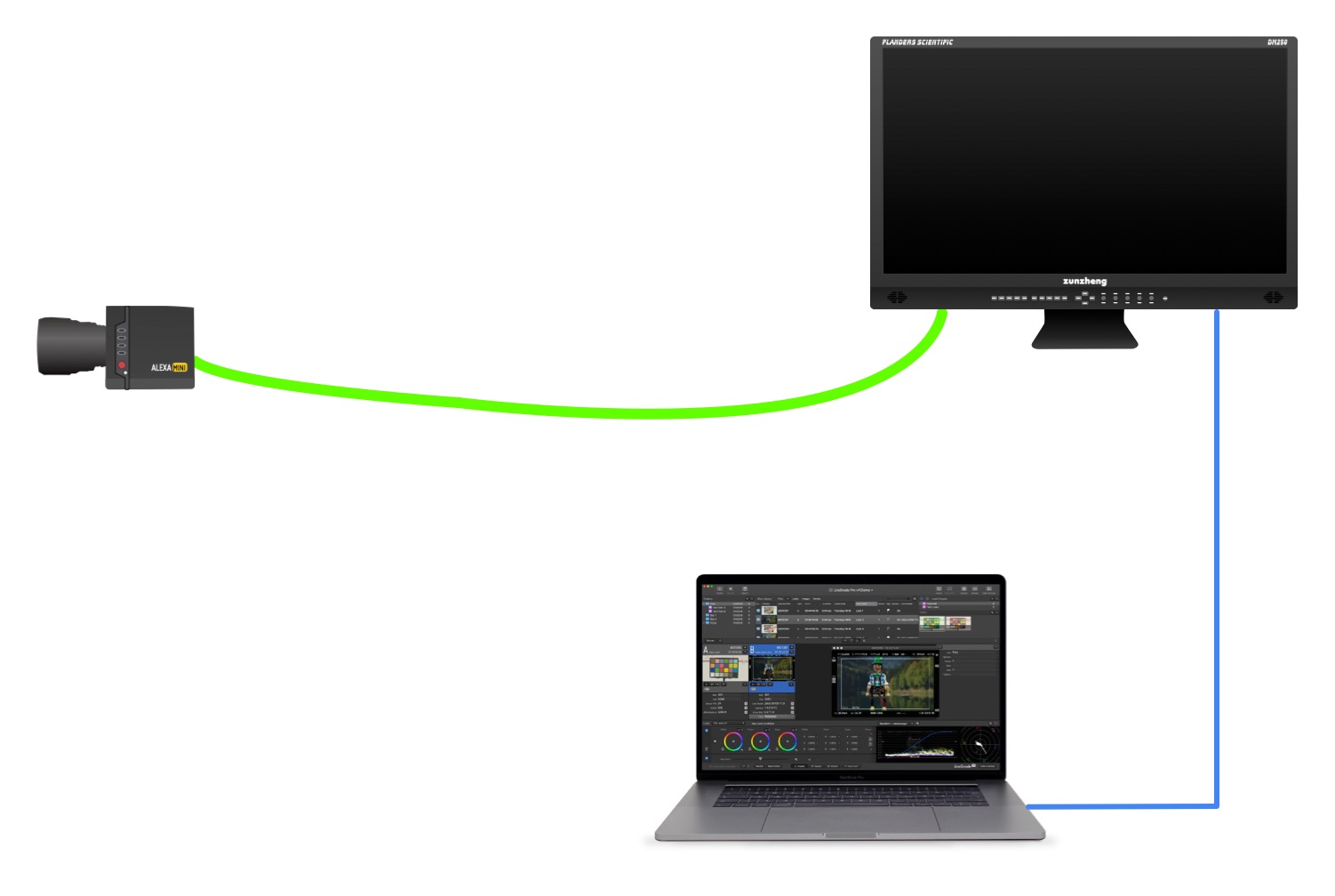 This super-simple setup works with any camera without any additional hardware.

For more than one camera this already can become cumbersome, as switching inputs might also require switching looks. But just in case, you can control multiple monitors from Livegrade.

Assuming a typical production with two cameras, the most flexible way for live grading is using two LUT boxes (or a multi-channel LUT box). The LUT boxes are usually close to the computer running Livegrade and close to the main monitor. If your monitor has two inputs to switch between, each channel is dedicated to one camera / one output of a LUT box. That setup would already be a small “cart” setup. 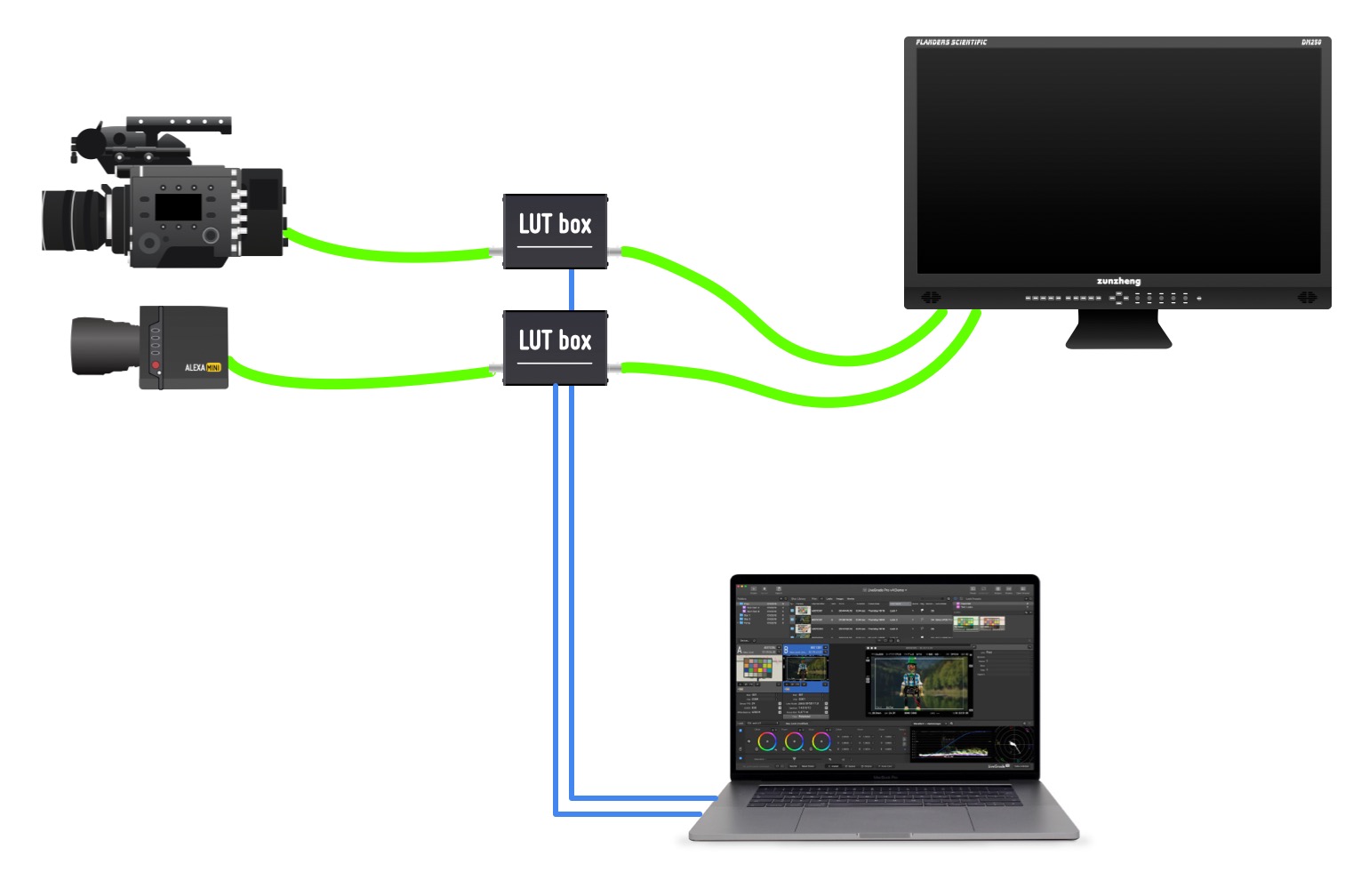 With two LUT boxes you can already start interactively matching the look of the cameras. With a monitor that allows you to see two signals side-by-side, you can watch the two camera signals at the same time and adjust one or the other to match the look of both (e.g. overall contrast).

This setup is somehow limited by the number of inputs of the monitor. With more cameras and LUT boxes than input ports, you will rather add a video router (see below) than plugging cables.

A variant of the configuration above is moving the LUT box to the camera and connect to it from Livegrade via Wifi. This results in a configuration similar to in-camera grading with similar benefits and limits. This works of course also for multiple cameras.

This is a more mobile setup, as for example an on-camera monitor also can show the look (if connected after the LUT box). On the “cart” side you are back to a notebook (and maybe a Wifi hotspot).

Similar to in-camera grading the look is applied already close to the camera, so if multiple people “hang” on the one cable, they will all see the same look (which usually reduces the interactivity in order not to confuse everyone with switching and adjusting looks outside the camera department).

By adding a capture device to your setup you can perform two tasks: Capturing still frames, and recording entire clips. In order to work with the captured material later, it is recommended to capture the original camera signal (usually a “log” signal) instead of the graded signal.

Livegrade supports capture hardware by AJA and Blackmagic Design. Auto-record based for example on the rec-flag from the camera is also possible for a range of cameras.

Some LUT boxes (e.g. FSI BoxIO, TVLogic IS-Mini X) and cameras (e.g. Alexa Mini, Amira, Alexa Mini LF) also support the creation of frame grabs (stills) to Livegrade. With this feature such devices can also act as a capture device, which simplifies the setup, but provides the same benefits. 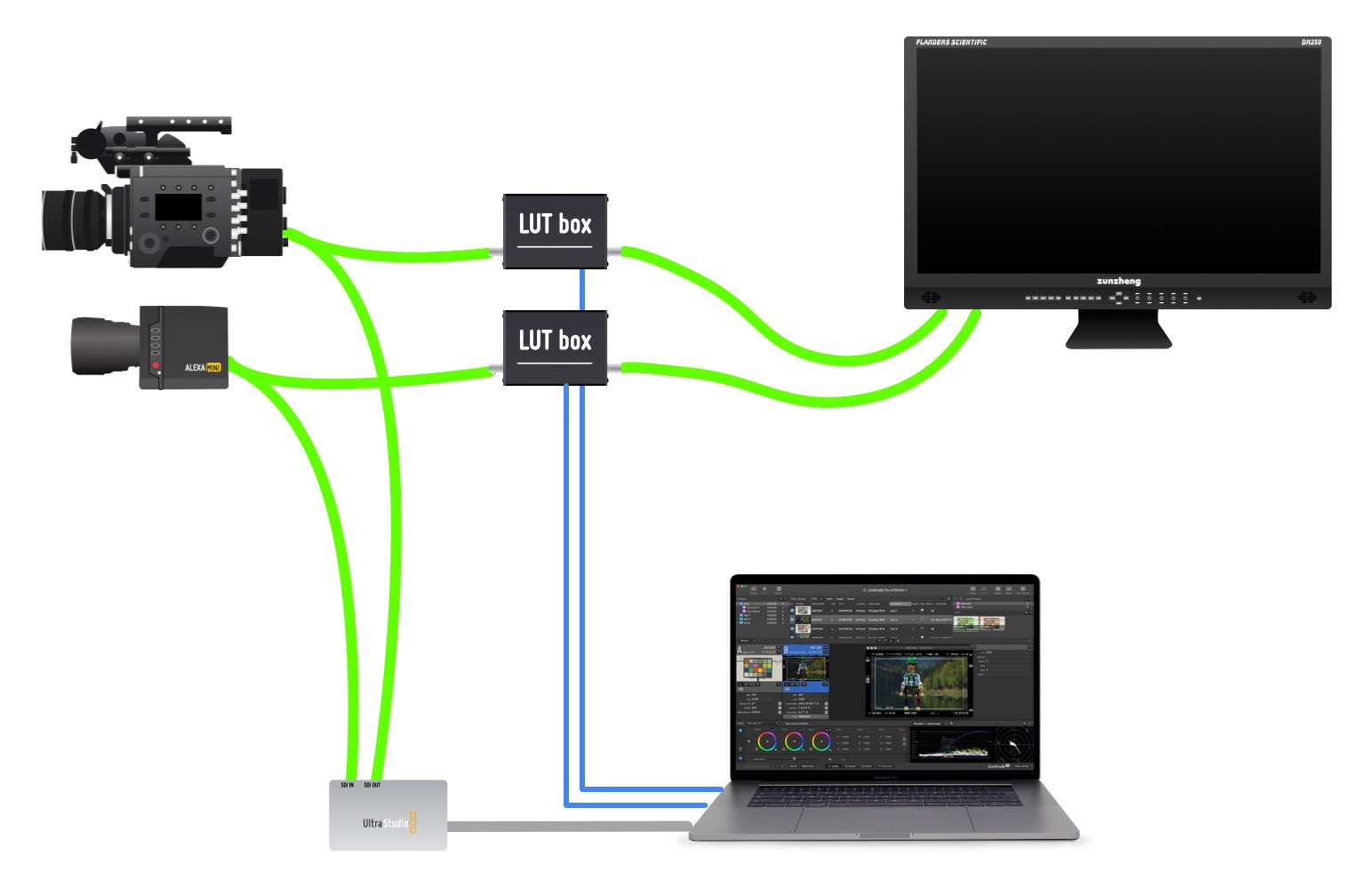 Capturing reference stills has several benefits. If you store look metadata in Livegrade for either later recall or for dailies export, it is helpful to have a visual clue what the look metadata is meant to be used for. Another use case would be comparing several frame grabs against the current live image. This can be done within Livegrade in the image viewer (e.g. in a split screen view) in order to match the look of the current scene to frame grabs from previously shot scenes. This improves consistency of the collected look metadata and the preparation for graded dailies creation.

Recording clips can be important in very dynamic scenes with lots of panning or camera movements. One still might simply not be sufficient to judge the look of an entire clip. By recording the entire clip, you can compare any of the frames of the recorded clip later for reference.[3]

Another benefit from accessing the video signals with a capture hardware is the extraction of camera metadata from the video ancillary metadata. This allows for monitoring and saving status information from the camera in Livegrade’s shot library.

Capturing the live image with dedicated capture devices needs lots of CPU/GPU power (not the still and metadata transfer from LUT boxes and cameras). So the number of simultaneously captured streams is limited by the computer’s resources.

The metadata in the HD-SDI signal is sometimes stripped by devices (e.g. some wireless video transmitters) in the signal chain between the camera and the DIT cart. This can prevent monitoring  and storing camera metadata in Livegrade.

An extension to the previous configuration is adding a video playout device to Livegrade. This can be used for example to output reference stills to your video infrastructure. 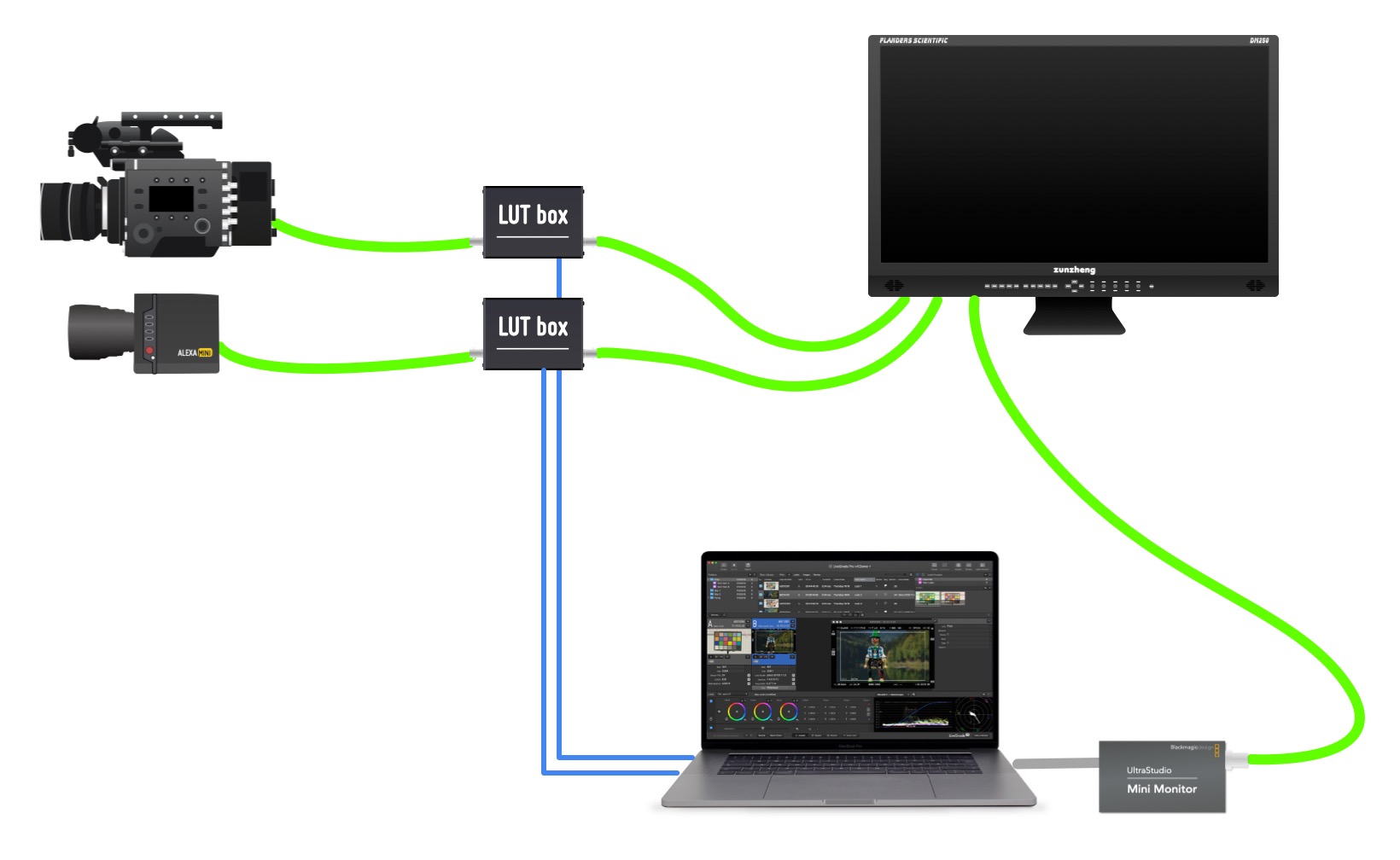 With video output you can work with captured reference stills in “video world” again, e.g. displaying them on calibrated HD-SDI monitors and using external vide scopes.

Currently only one video output is supported by Livegrade (from current slot or the library slot).

As soon as the number of camera signals, LUT boxes, or monitors gets higher than “just a few”, or switching signals becomes a permanent task, a central video router at the DIT cart will become necessary as a flexible way to connect all video devices.

Video routers typically come with their own physical control panels and control software, but integration of routing events and visualizing the current routing setup are features in the Livegrade software. 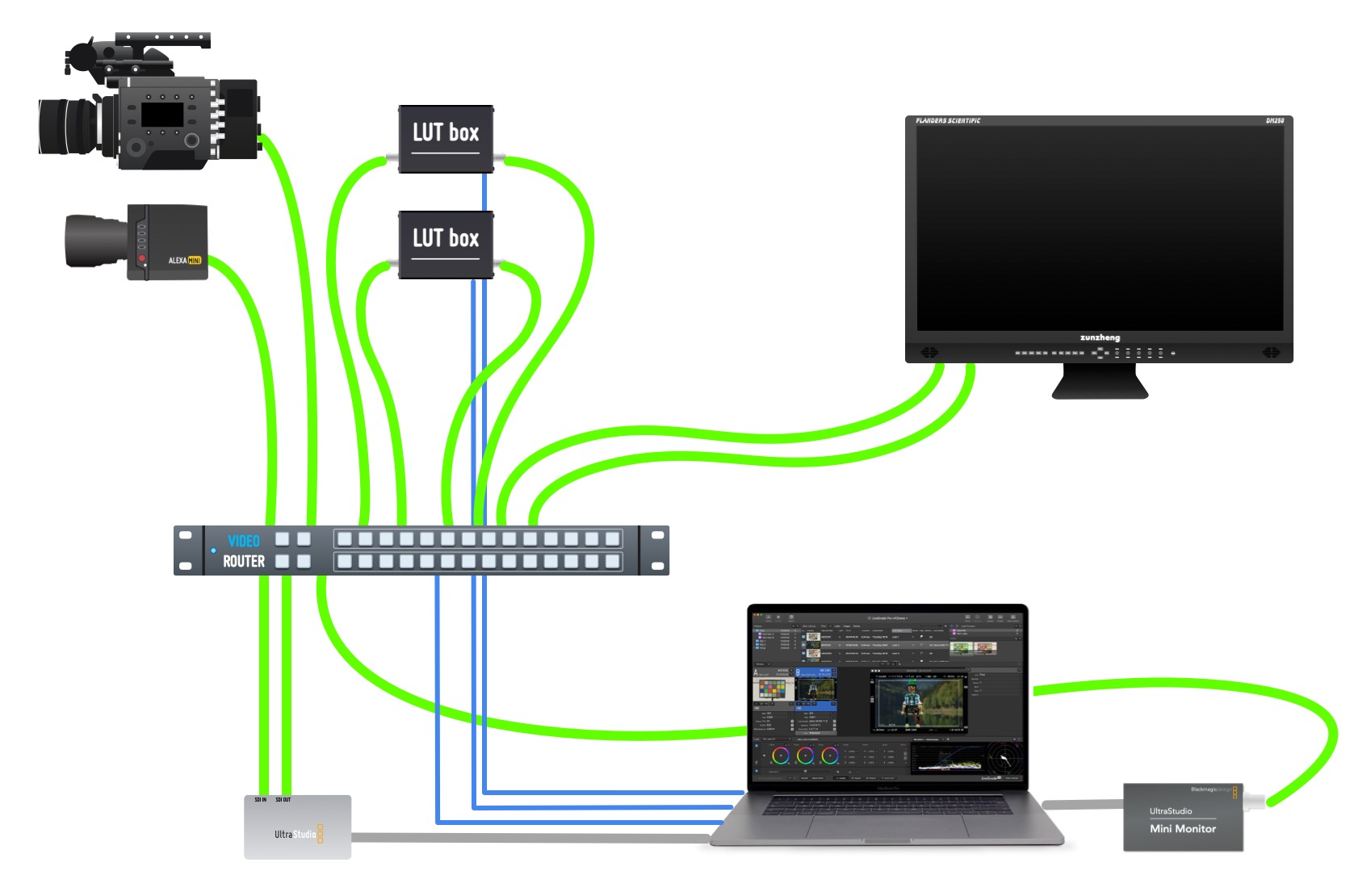 With a video router any image source can be connected to any destination through software. So specific requirements during shooting can be solved without plugging cables.

Depending on the number of ports on the video router (usually starting with 16 or 20 inputs and outputs) you can attach a high number of devices and manage the most complex DIT carts.

With Livegrade you can automate routing tasks with events in the software (such as switching between cameras), or apply routing presets with keyboard shortcuts or external controllers.

Our knowledge base includes two articles that discuss some of the mentioned hardware configurations in more detail:

Our blog includes a good list of interviews with DITs about their carts including details about their hardware setup. Here are a few examples:

[1] When we use the term “Livegrade” we actually mean any of the products Livegrade Pro or Livegrade Studio.

[2] The fourth option is to capture the signal with the computer, let Livegrade itself process the image in software, and play it out again. This is possible, but has a few fundamental disadvantages: It has much more latency than the hardware solutions, and it doesn’t scale well because all live signals would need to be processed by the same computer, which needs lots of CPU/GPU power.

[3] Please note that for some countries and unions there is an explicit distinction between the DIT role and the video assist role on set. The recording and playback functionality in Livegrade as a DIT software is designed to be used as part of the work in the camera department (e.g. providing reference frames for the DP).

Patrick is a product manager for Pomfort's on-set applications. For his work at Pomfort he combines a technical background in software engineering with practical experience in digital film productions – and a preference for things that actually work.